Liars @ The Metropolitan Museum of Art 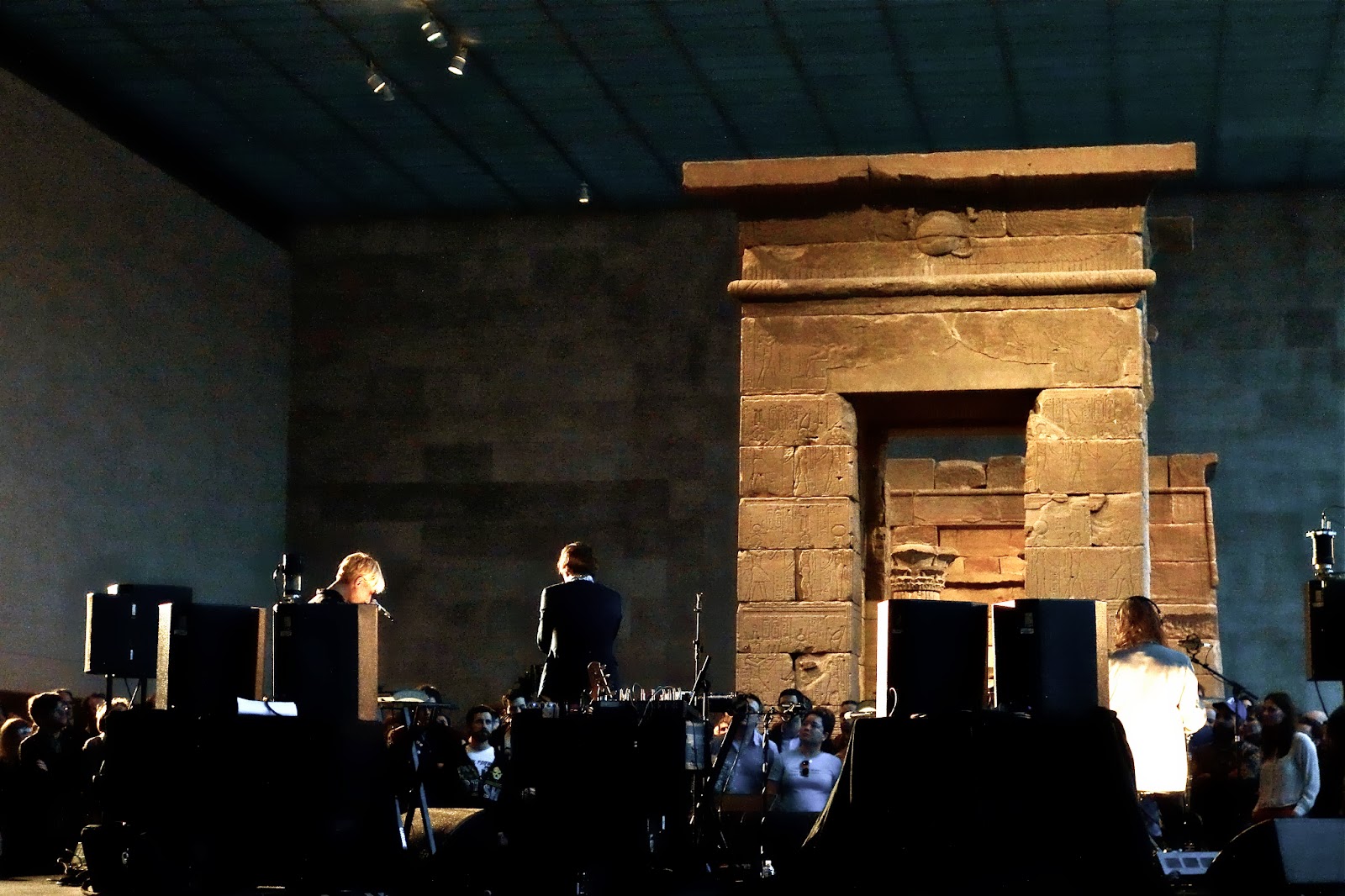 The Temple of Dendur is an ancient Egyptian temple constructed of sandstone and full of stunning reliefs on permanent display in the Metropolitan Museum of Art, a place where artifacts are preserved to act as a window to the past.  Liars are a band from Brooklyn constructed of three members who thrive on impermanence, consistently moving toward new horizons and uncharted territory.  On Saturday evening, the two were both on display for a sold out audience to study and admire. 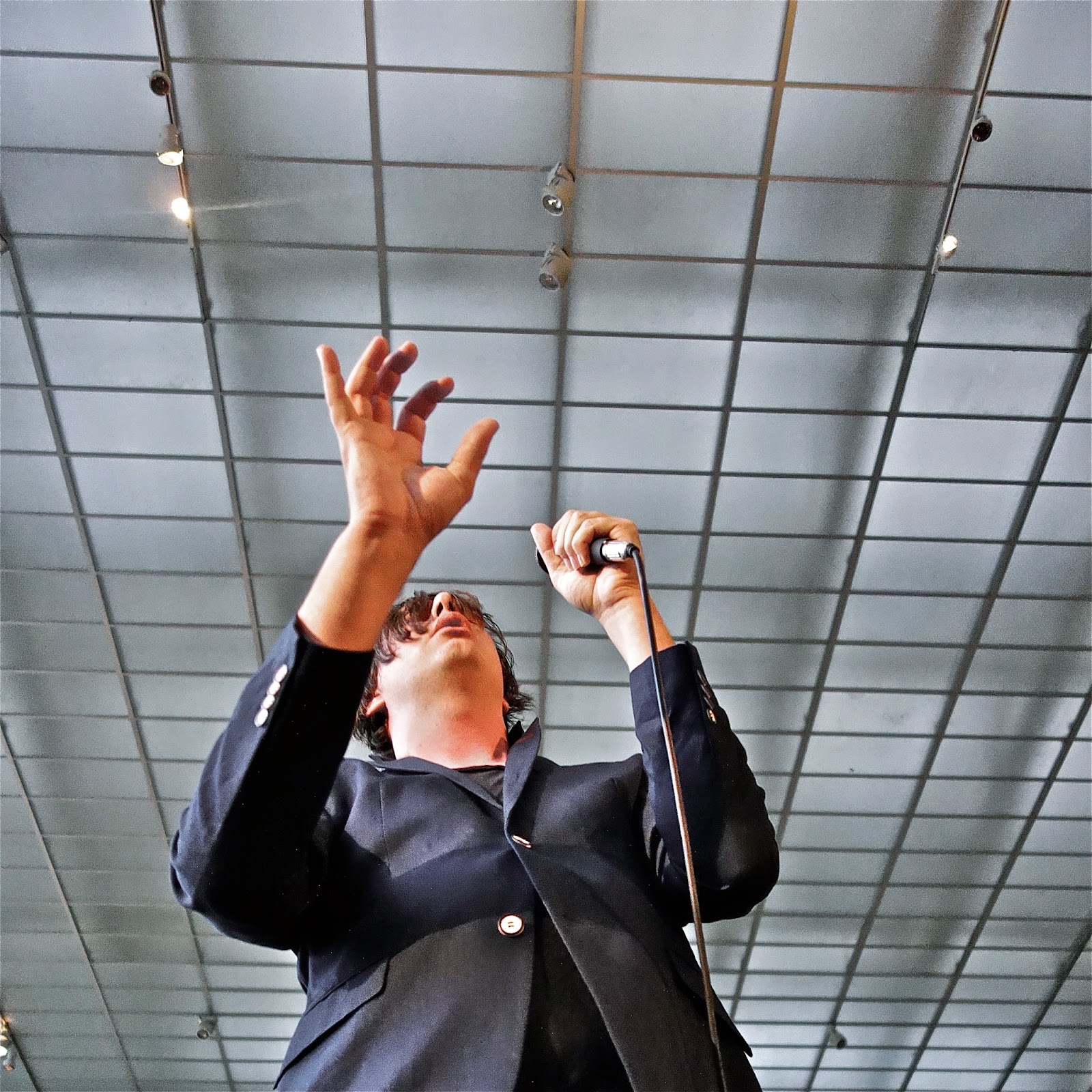 The show was presented in conjunction with the Met's current "Punk: Chaos to Couture" exhibition, which examines punk's influence on fashion.  Not in the mood to celebrate nausea inducing cultural co-opting, I skipped the bollocks when I arrived early and strolled through the current photography exhibits instead.  Not only did I feel like feeding my eyes stimulating images, but it was a perfect fit being that the Liars' Agnus Andrew and Julian Gross joined forces after becoming friends in the photography program at CalArts in Los Angeles.  I've always hated wandering museums with weekend crowds clotting the galleries.  This time I enjoyed it.  Experiencing the art on display with others felt comfortable.  Maybe it's all the live shows I've been seeing.  It's cool to feel something from a work, then become a voyeur and watch the reactions of others.  Two of the exhibits I saw are finishing up before the end of the month and both are worth seeing.  Street is a collaboration between James Nares and Thurston Moore that's nothing short of mesmerizing.  After Photoshop had some killer stuff as well.  What is this? A museum journal?  Let's get to the Liars. 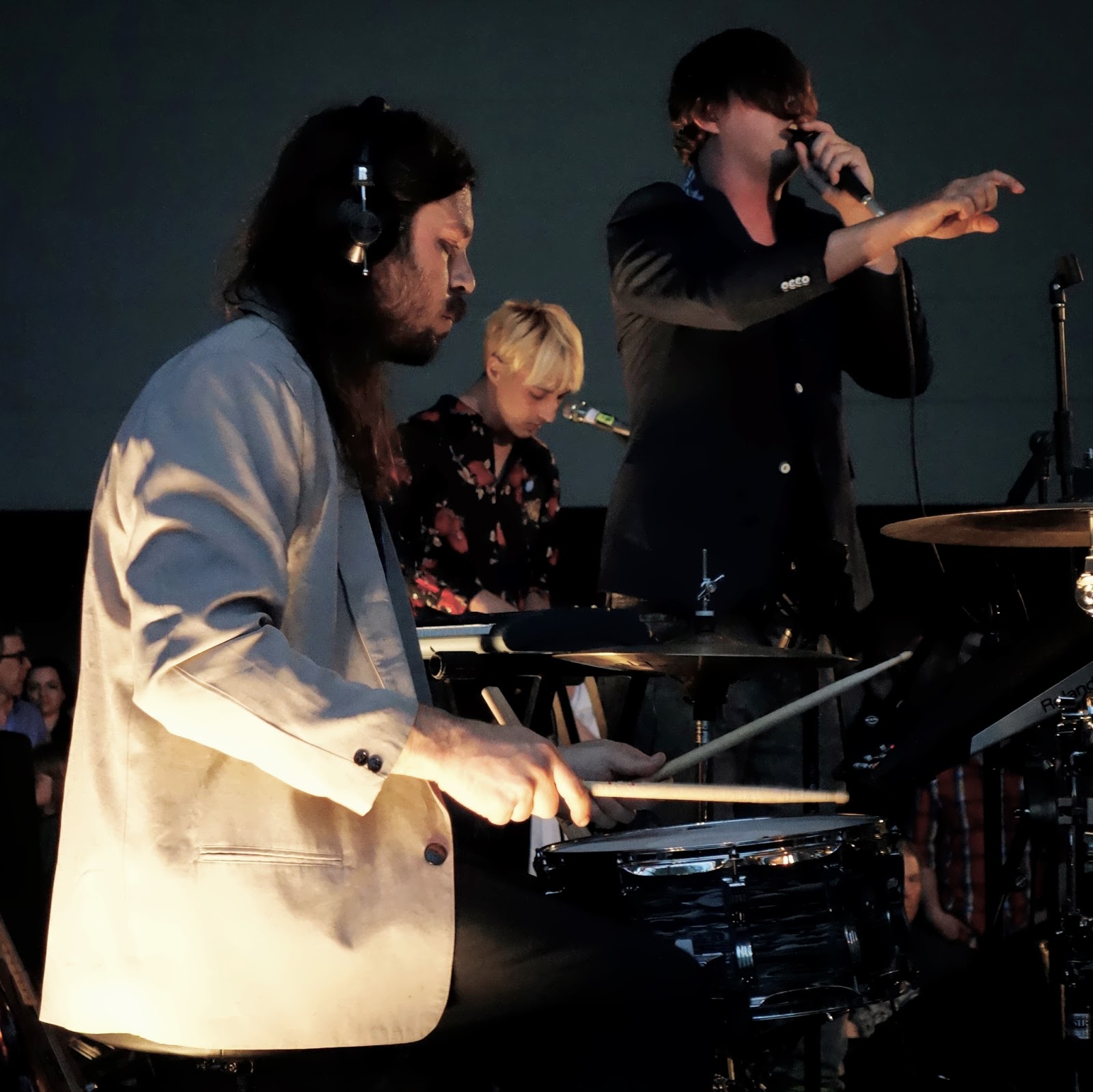 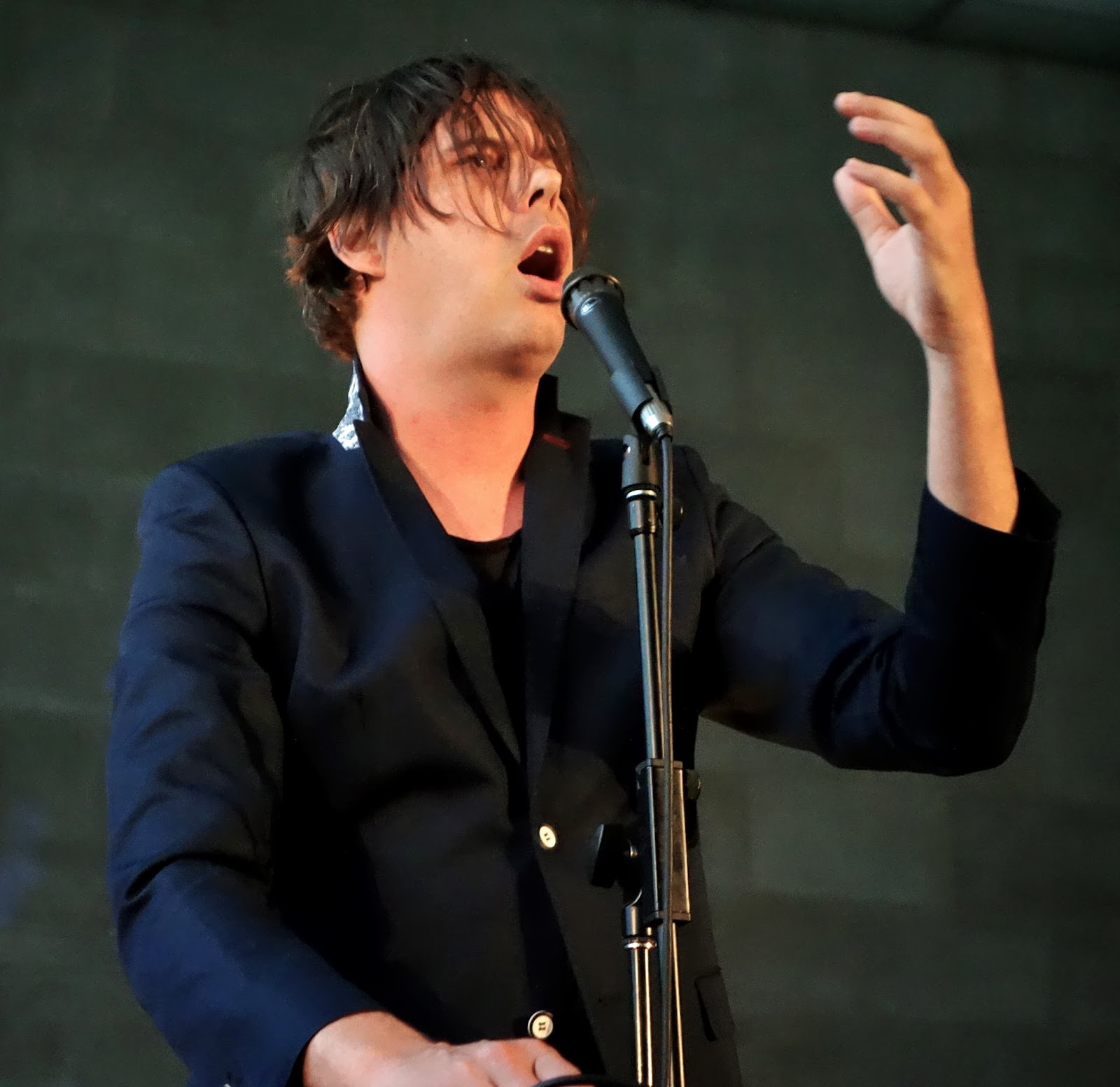 There was a time that listening to Liars kind of spooked me out.  Their music has changed over the years, but there has always been a darkness to it.  The chords and notes they build with often clash in eerie ways.  Their videos dabble in the disturbing.  When they record they retreat, isolating themselves in deep woods or abandoned office buildings in the dead part of town.  They don't do bright and cheerful.  As I've aged, however, I don't always need the lights on.  Comfort can sometimes be found in the dark.  Thanks to their last album, WIXIW, I am officially a Liars fan.  It's mix of ambient textures, synths, and masterful drum programming takes you for a long and beautiful ride.  This was exactly what they brought to The Met.  The hour long set had a handful of tracks from WIXIW and a ton of new songs.  I spotted David Fricke in the crowd and he also reviewed this show.  He can write circles around me, so go HERE for his insight into their new stuff. 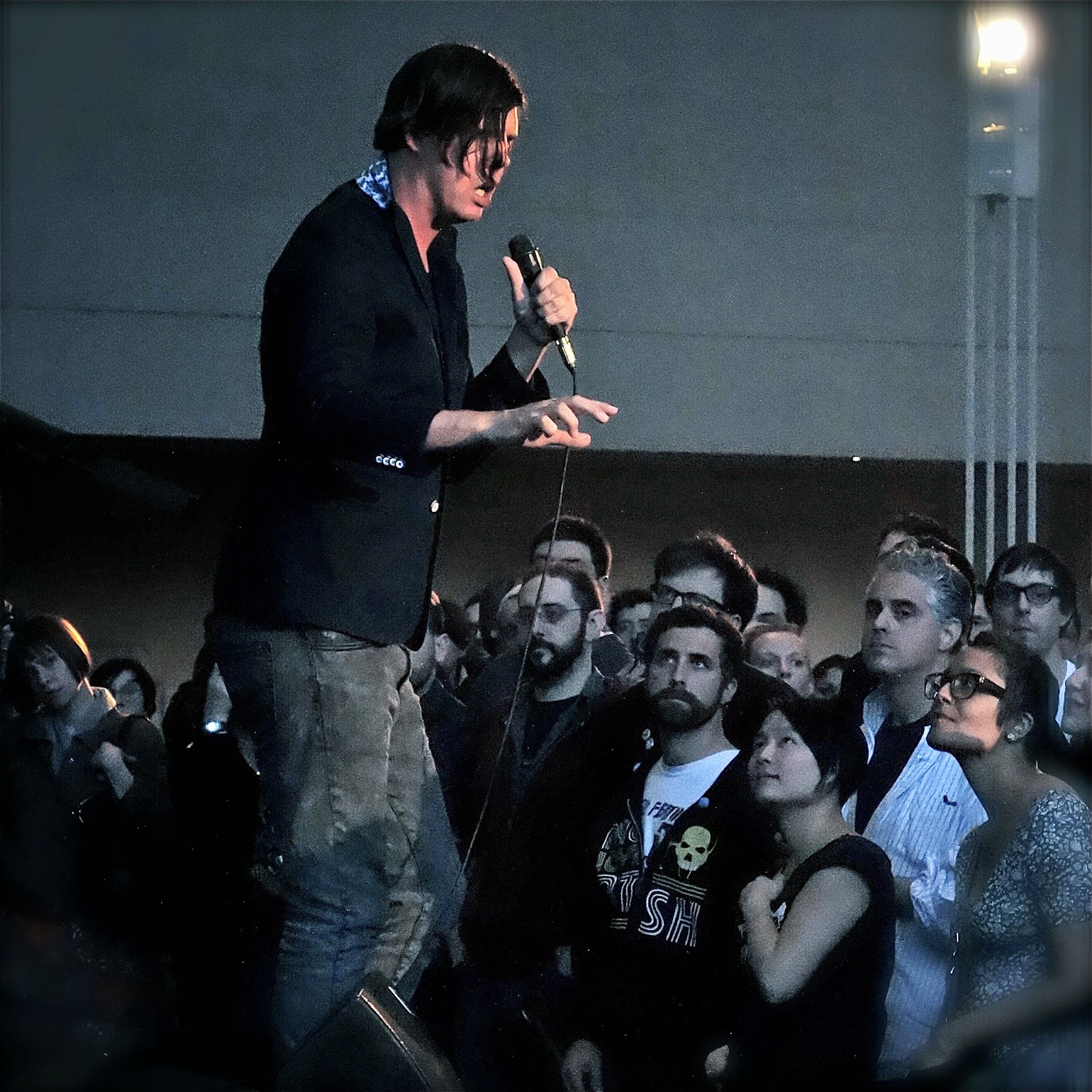 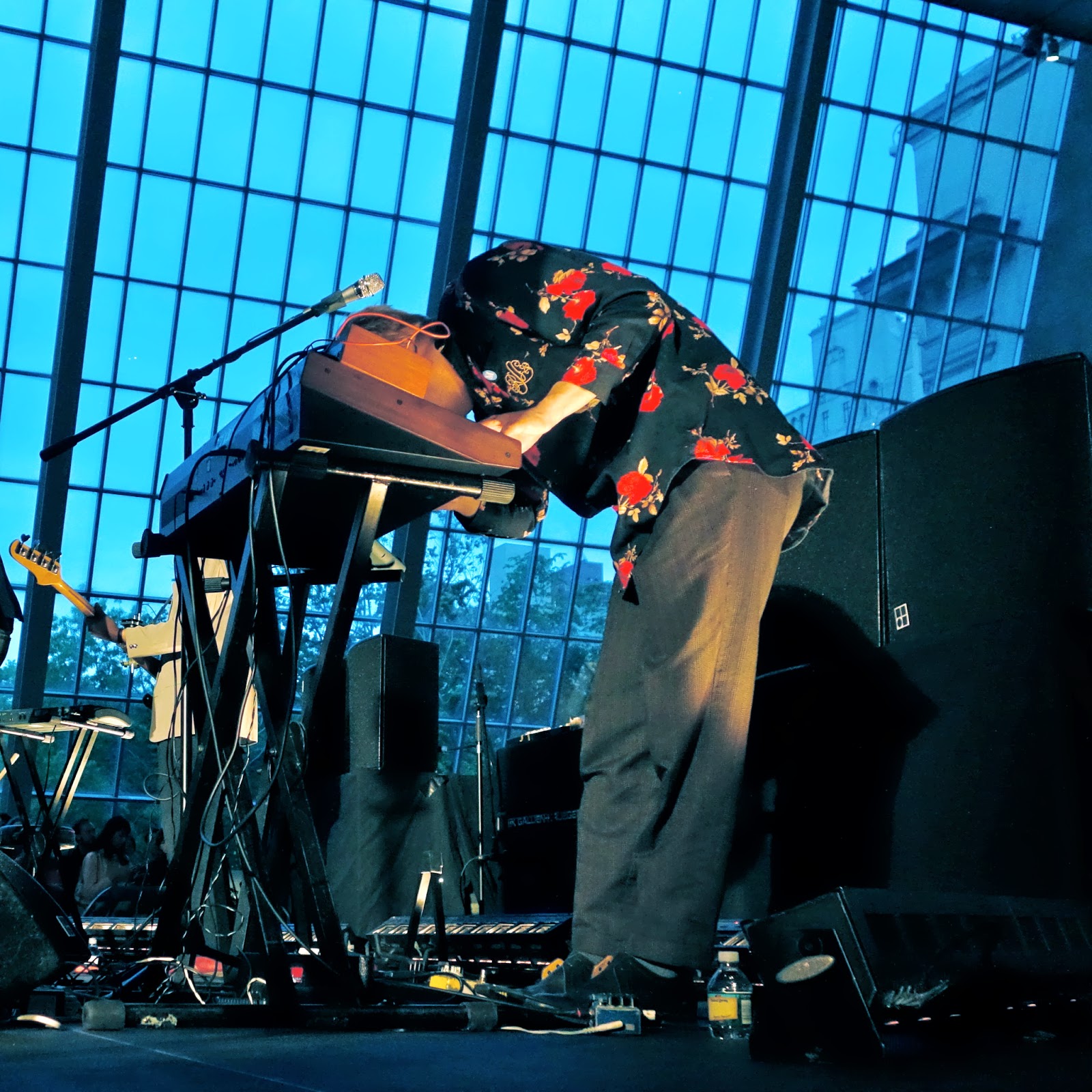 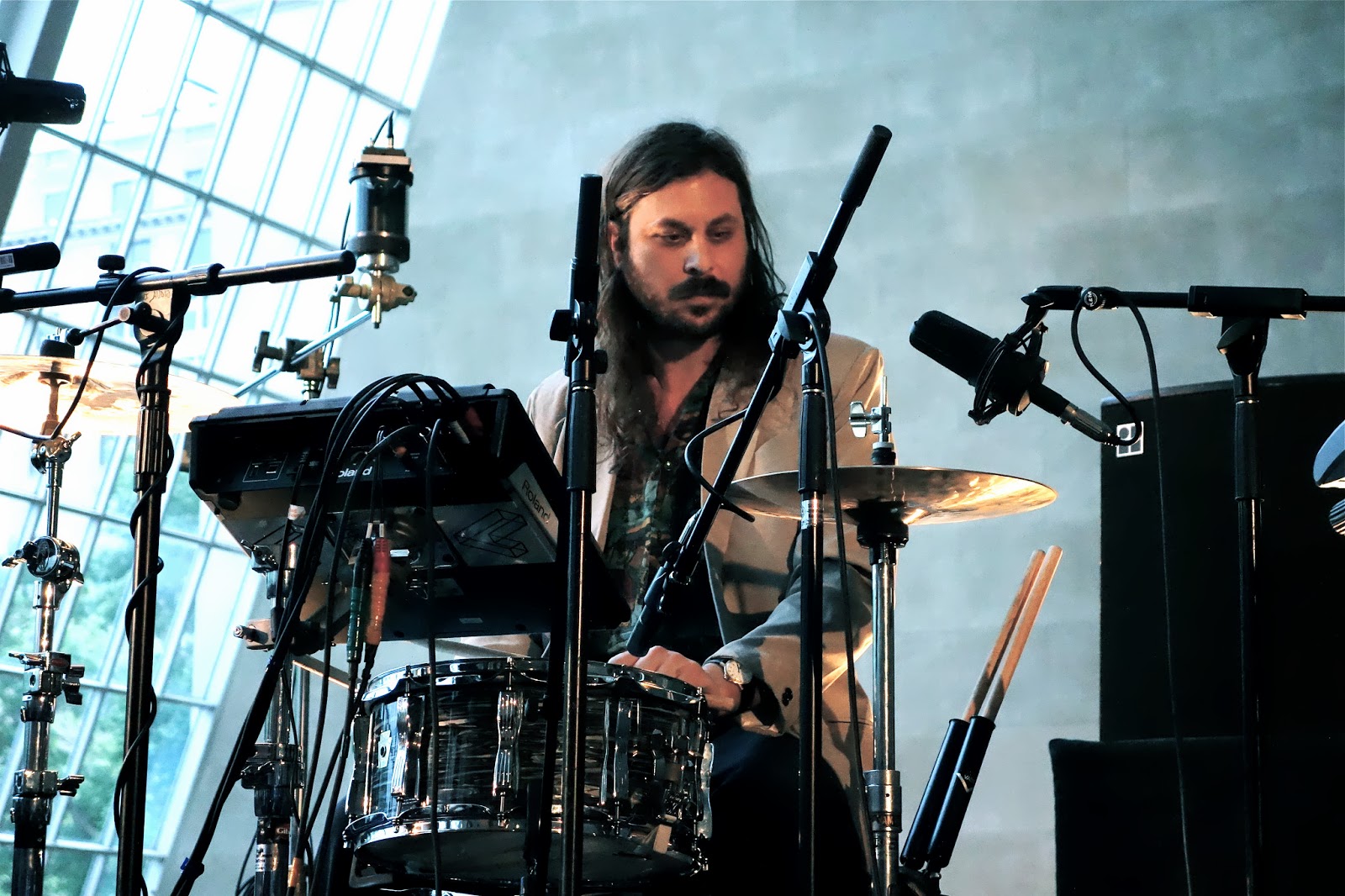 While Liars gave a great show, the pasty crowd of mainly stiff 30 somethings was pretty lame.  Lots of gazing and analyzing through dark framed glasses.  Guess you can't expect mayhem at the Met.  That would be actual punk.  Solid show.  Unique setting.  Glad I went.  Thanks for getting tickets, E. 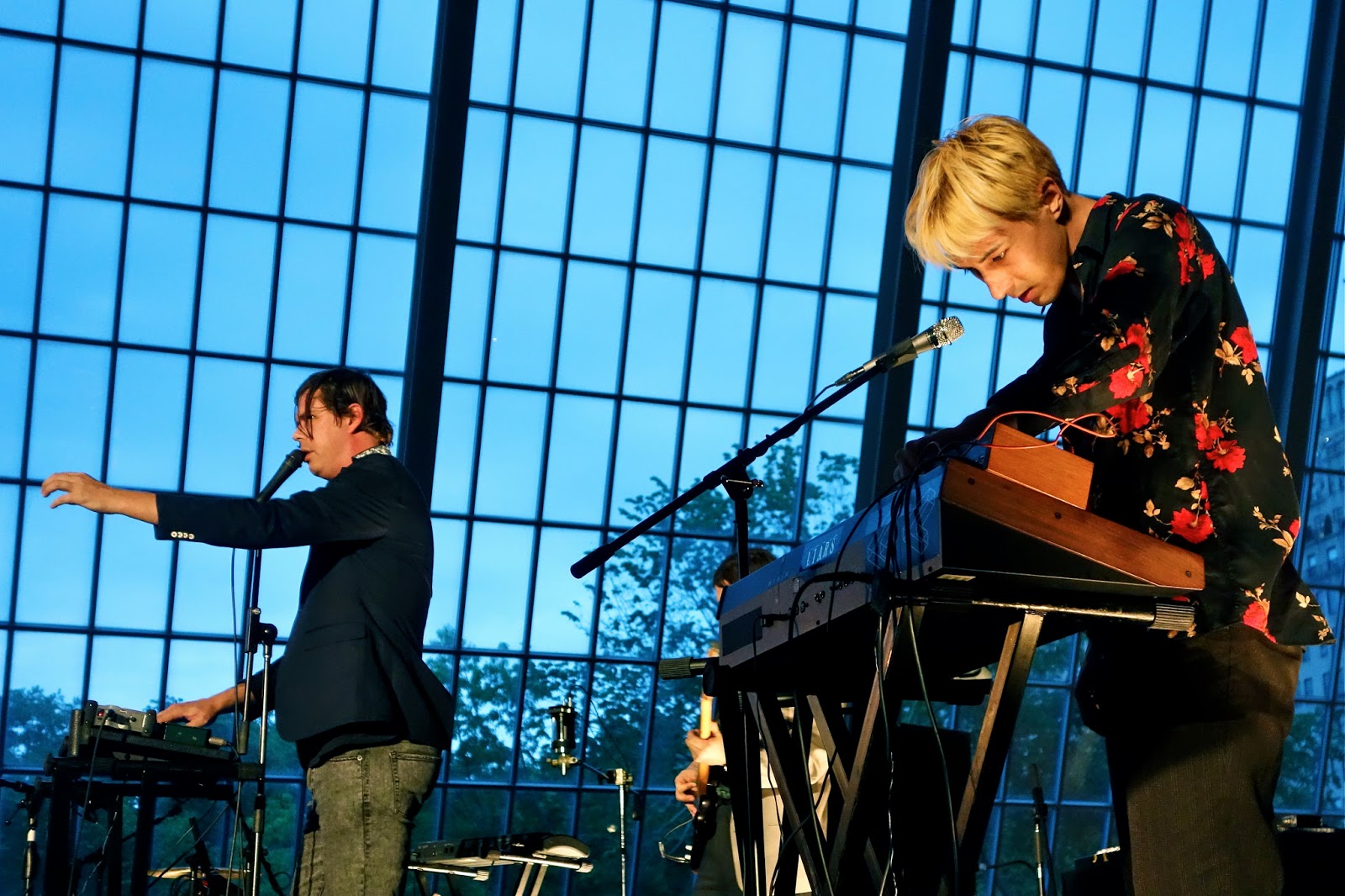 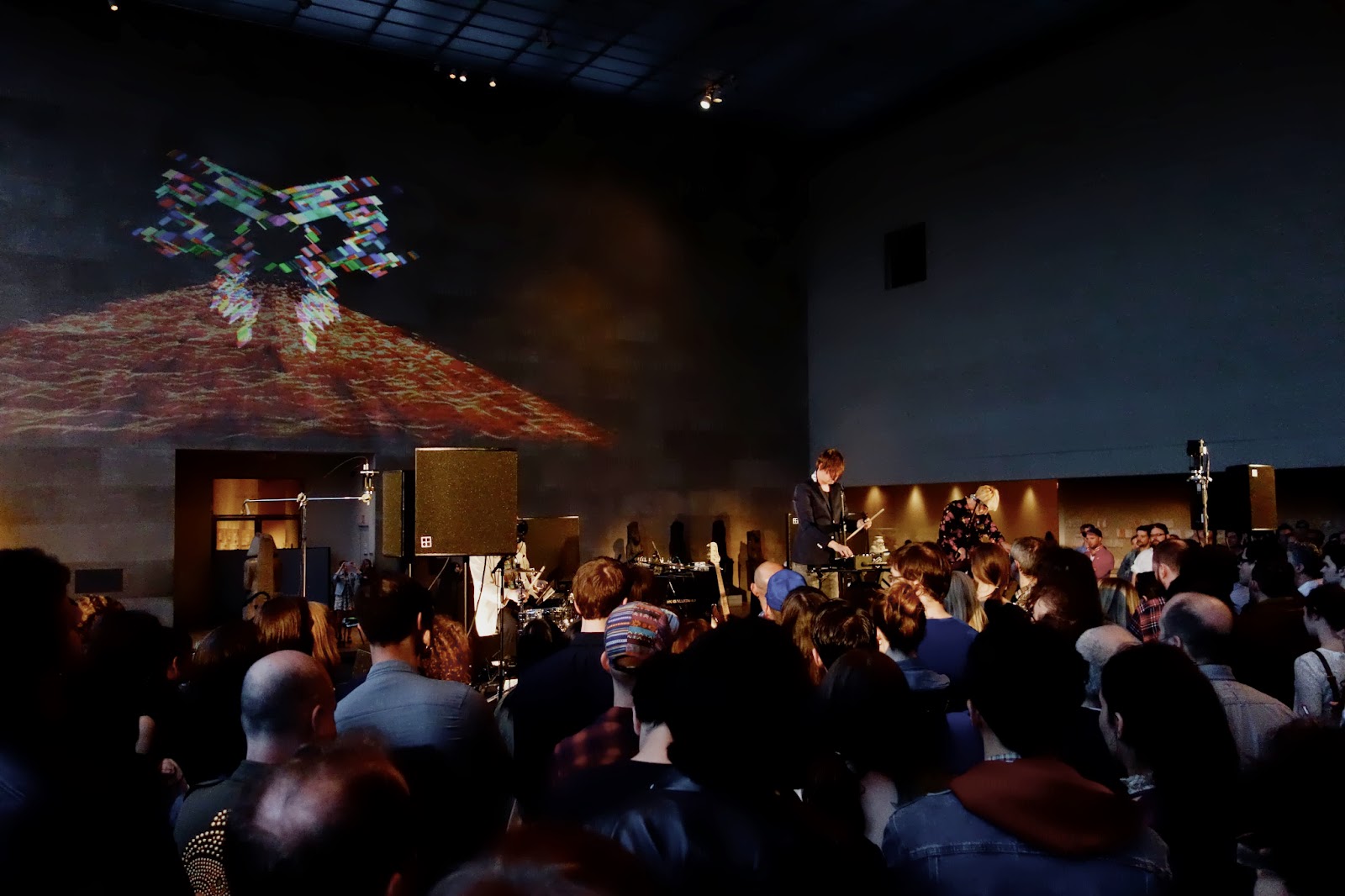 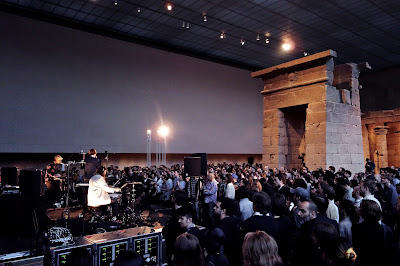 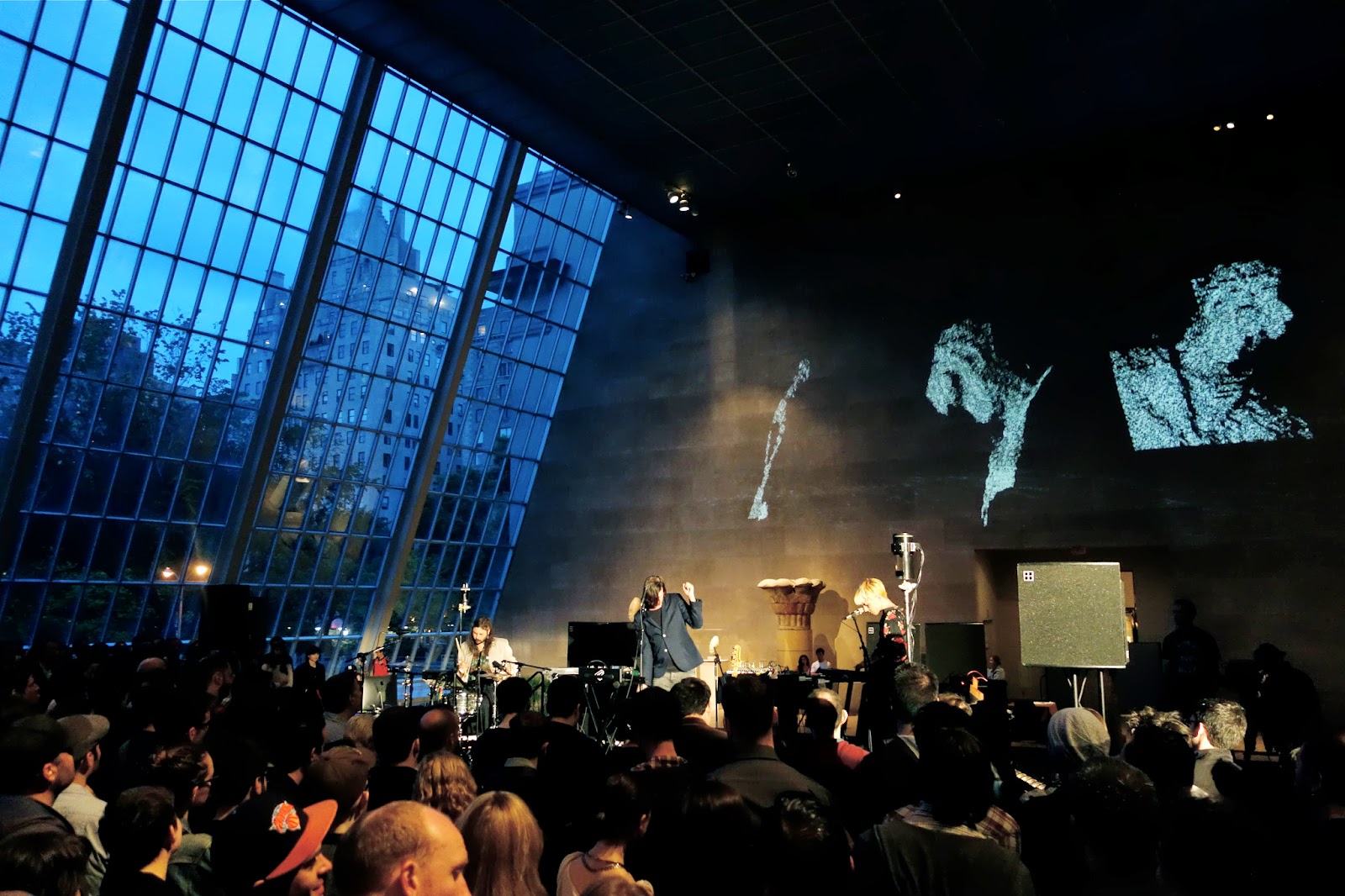 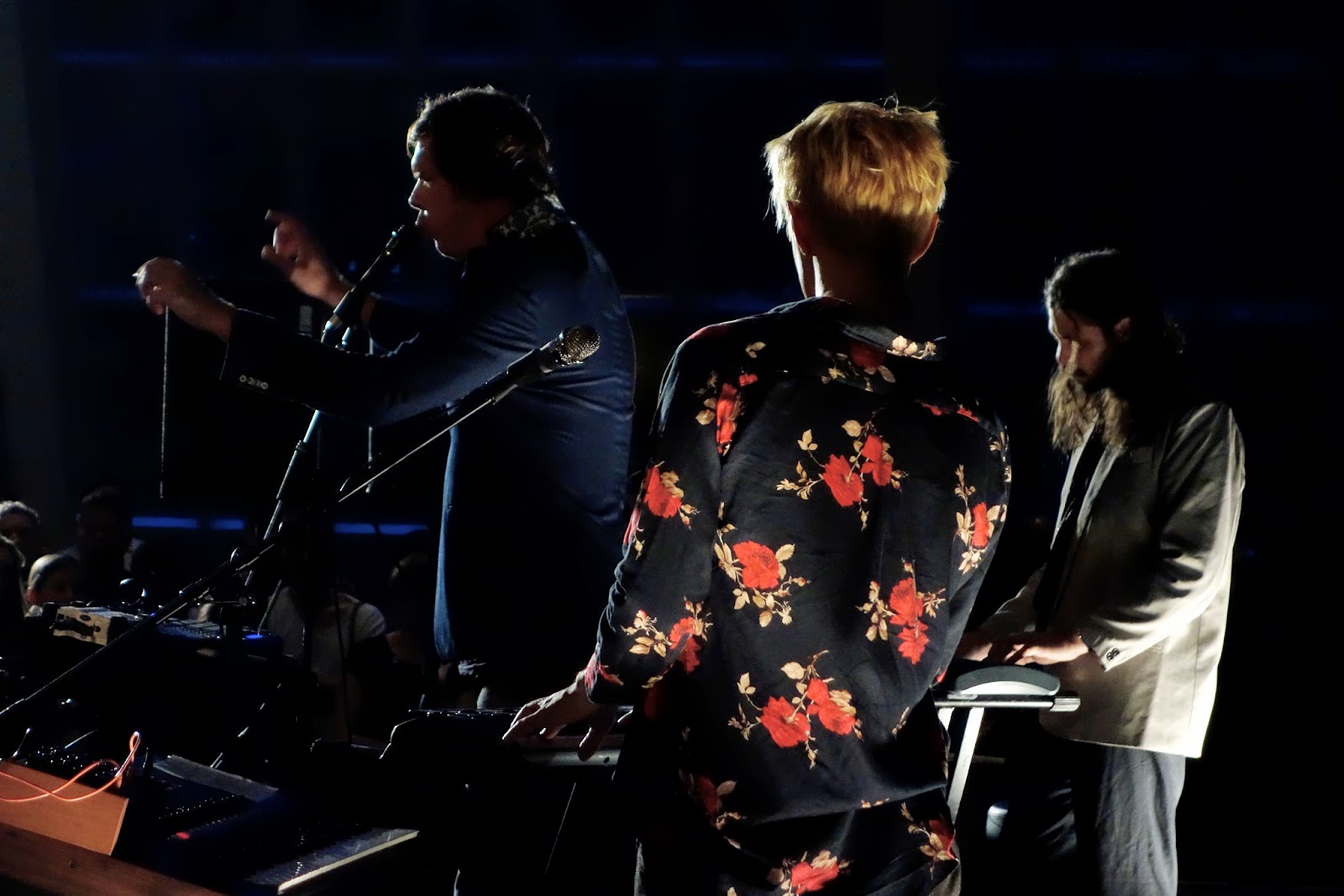 To see all the pics I snapped of this show, go HERE.


Tues May 28 – Interzona, Verona, IT Tickets

Liars - No.1 Against The Rush (Official Video) from Mute on Vimeo.