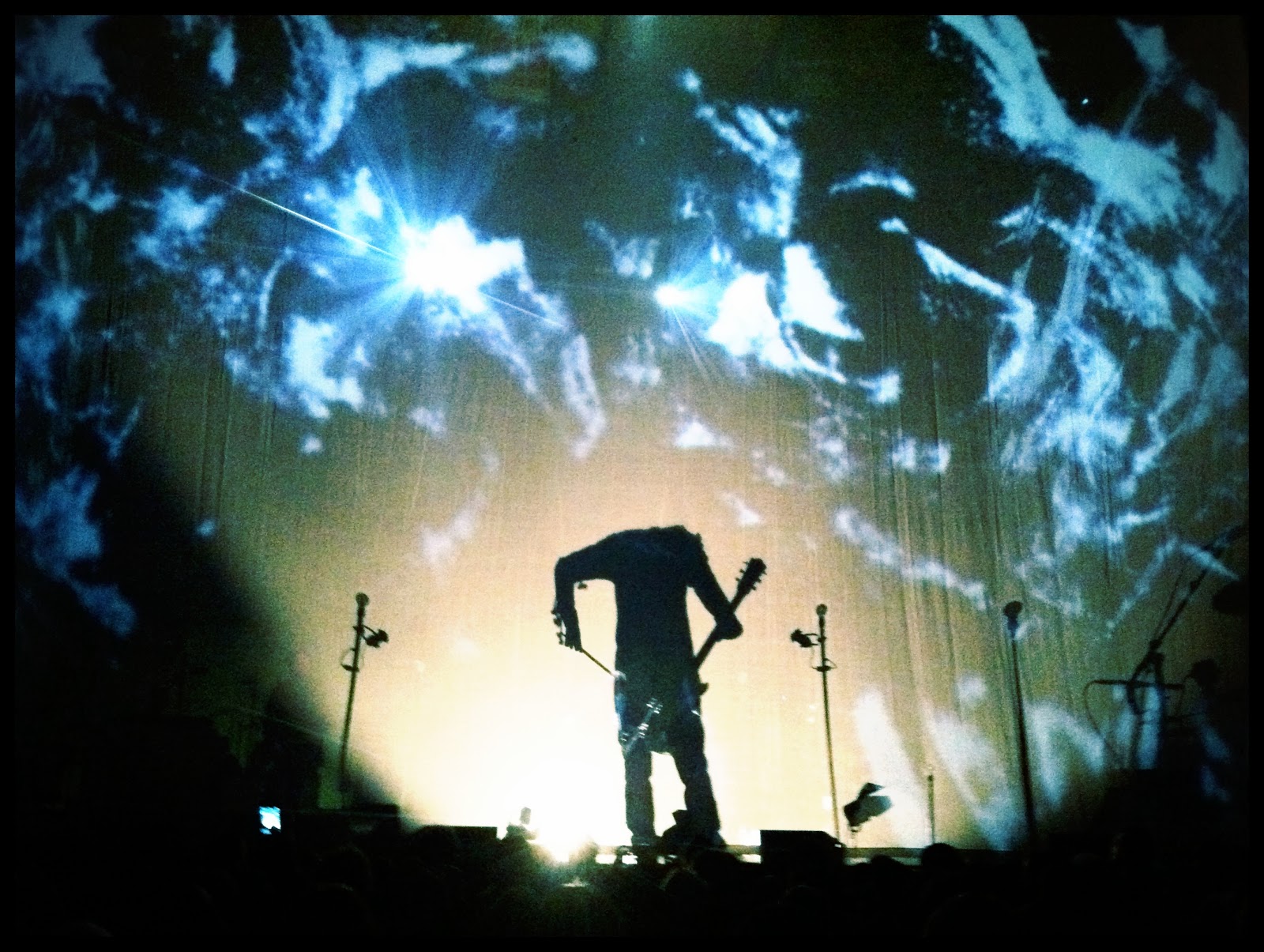 I'm a bit late writing up this show.  Life swept me up in various pursuits and I just couldn't get myself to sit down when I had some free time.  Finally I'm ready to share my thoughts on the great Sigur Ros.  Seeing them at the Garden turned out to be a memorable experience.  It was by far the best show I've seen all year.  From start to finish, beginning to end, they were nothing short of astounding. 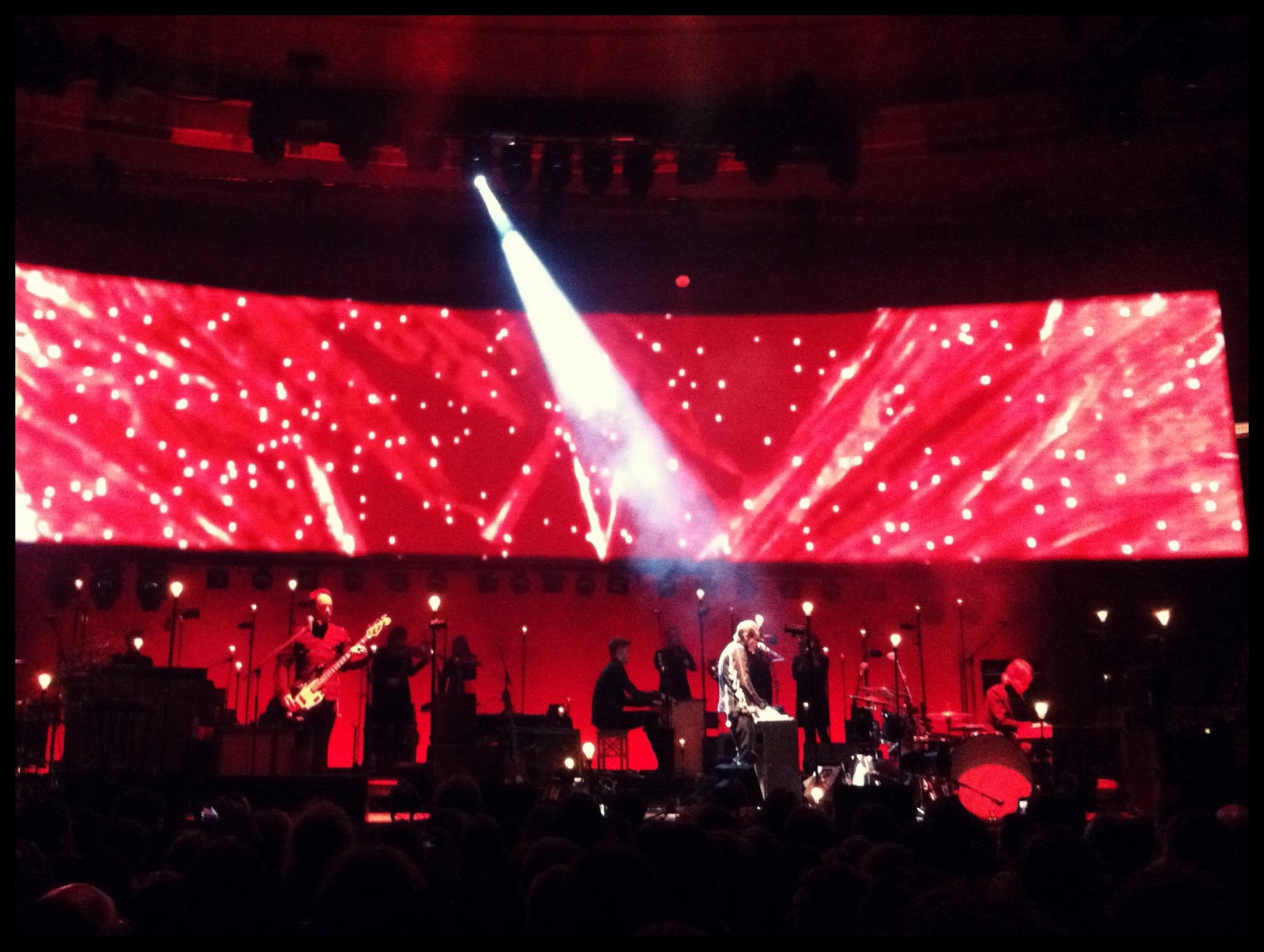 My buddy Erik joined me for the show.  He's been a big fan for years, which made me even more confident the show would be serious.  Erik's got good taste and I always love seeing shows with people who are really into the band.  We grabbed some beer and walked through the tunnel toward our section.  We were supposed to be in the 3rd section, the last grouping of seats furthest from the stage and still on the floor.  Instead of finding our row, we just kept walking, wanting to see how far we'd get.  Before we knew it we were in the first section of the floor, maybe 30 feet from the stage.  Needless to say, our excitement quadrupled.  Erik turned to me with bugged out eyes, "Are you kidding me? Section 1 of the floor?!"  We toasted our good fortune.  Not long after, the lights went down. 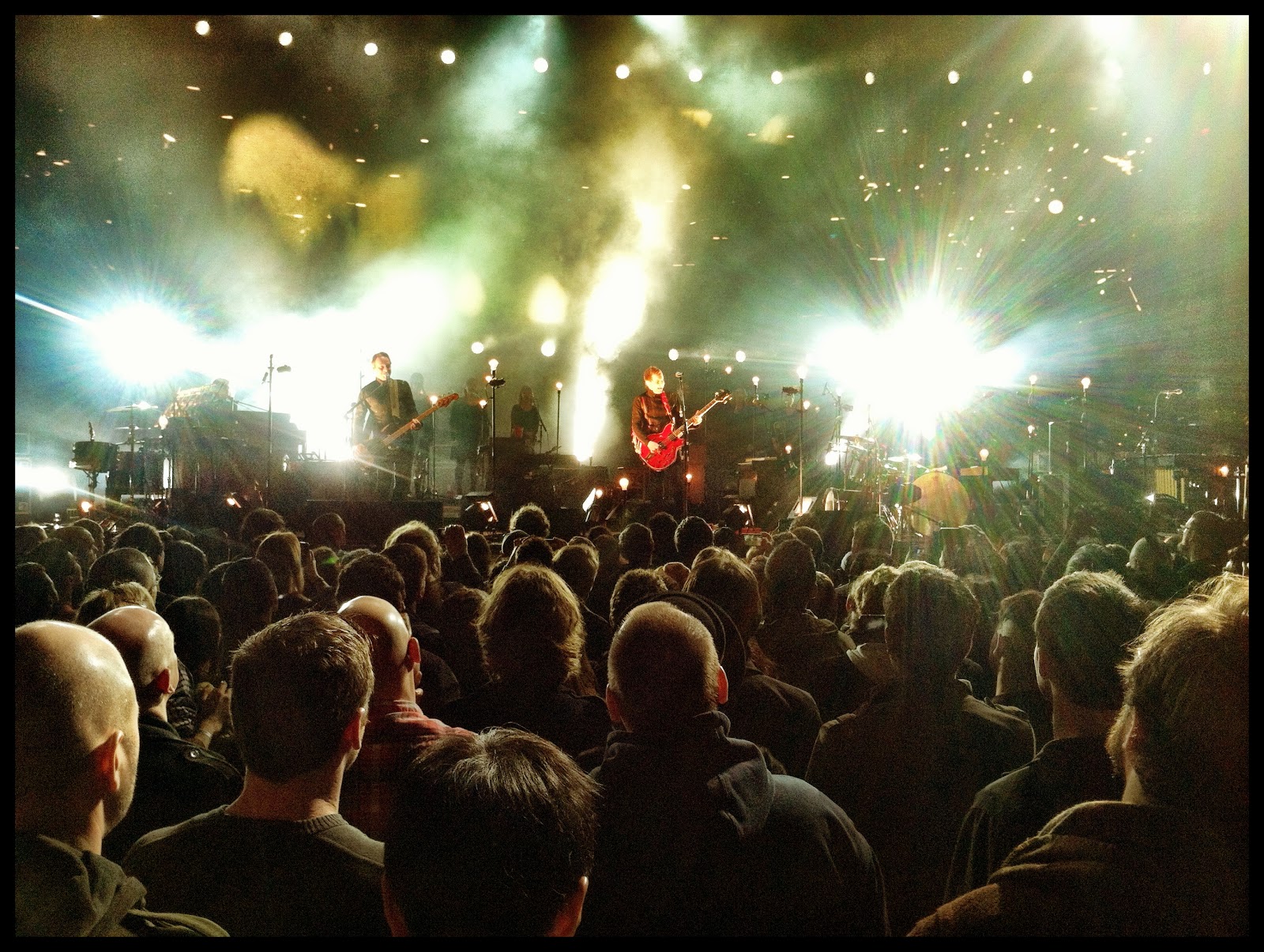 The show opened with sheer fabric hanging around the stage.  Abstract projections lit it up while the band played inside the square.  It looked like they were playing inside of a television with an art film playing.  At times the projections went dark and the lighting came from behind and beneath the band, sending large shadows against the fabric with stunning effect.  Then, as one of the songs swelled to an epic crescendo, the fabric dropped revealing the band for the first time.  The place went nuts. 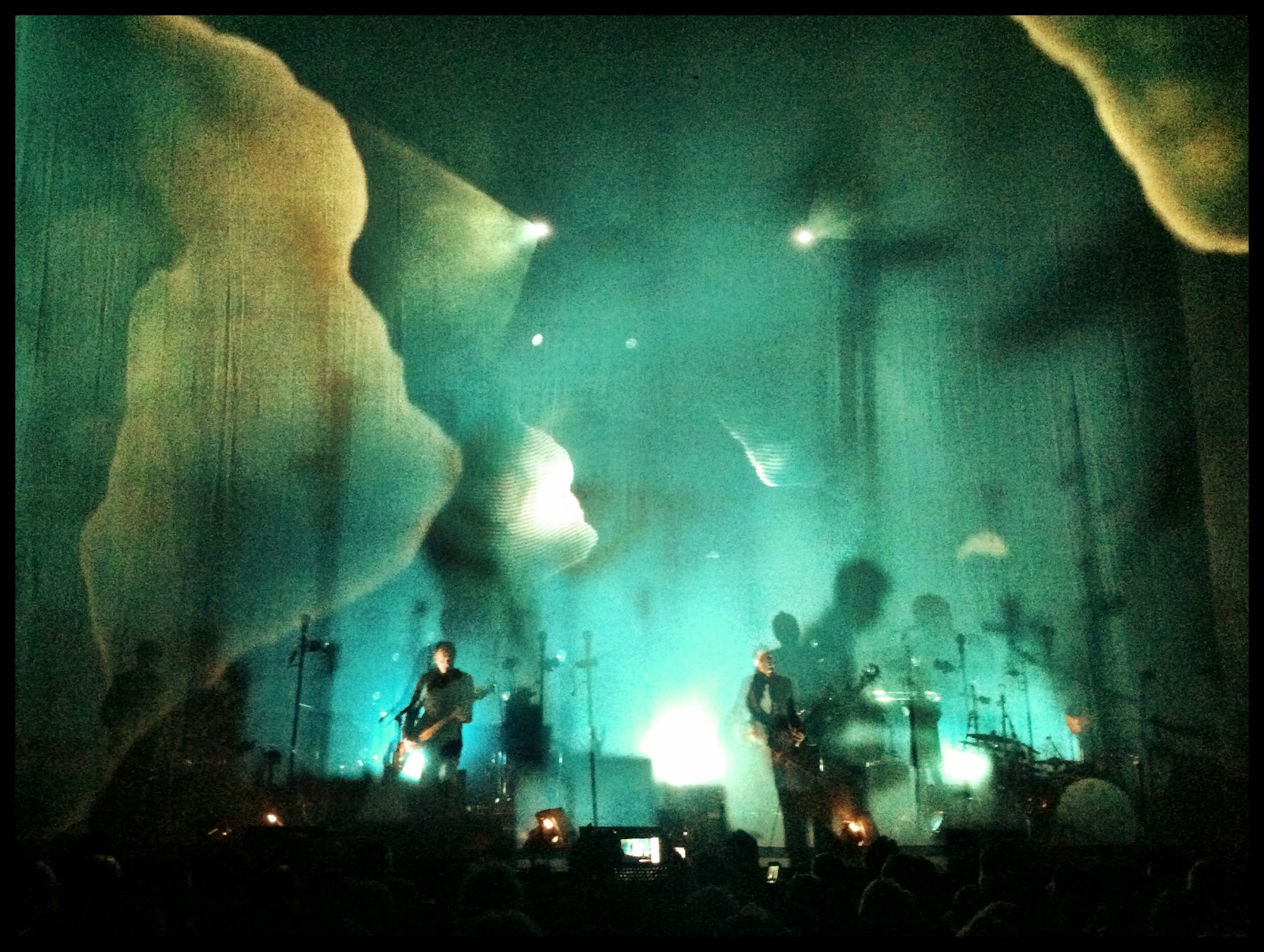 Sigur Ros came to blow minds and they succeeded.  For over two hours they never let up.  Song after song washed over the sold out crowd, inspiring many to close their eyes and raise their hands to the heavens.  Their music has an epic quality that feels almost like a religious experience when experienced live with others.  They transformed the Garden to a massive cathedral and their fans into a mesmerized mass.  At one point, Erik yelled, "I need an intermission.  They don't let you come down.  They're relentless!" 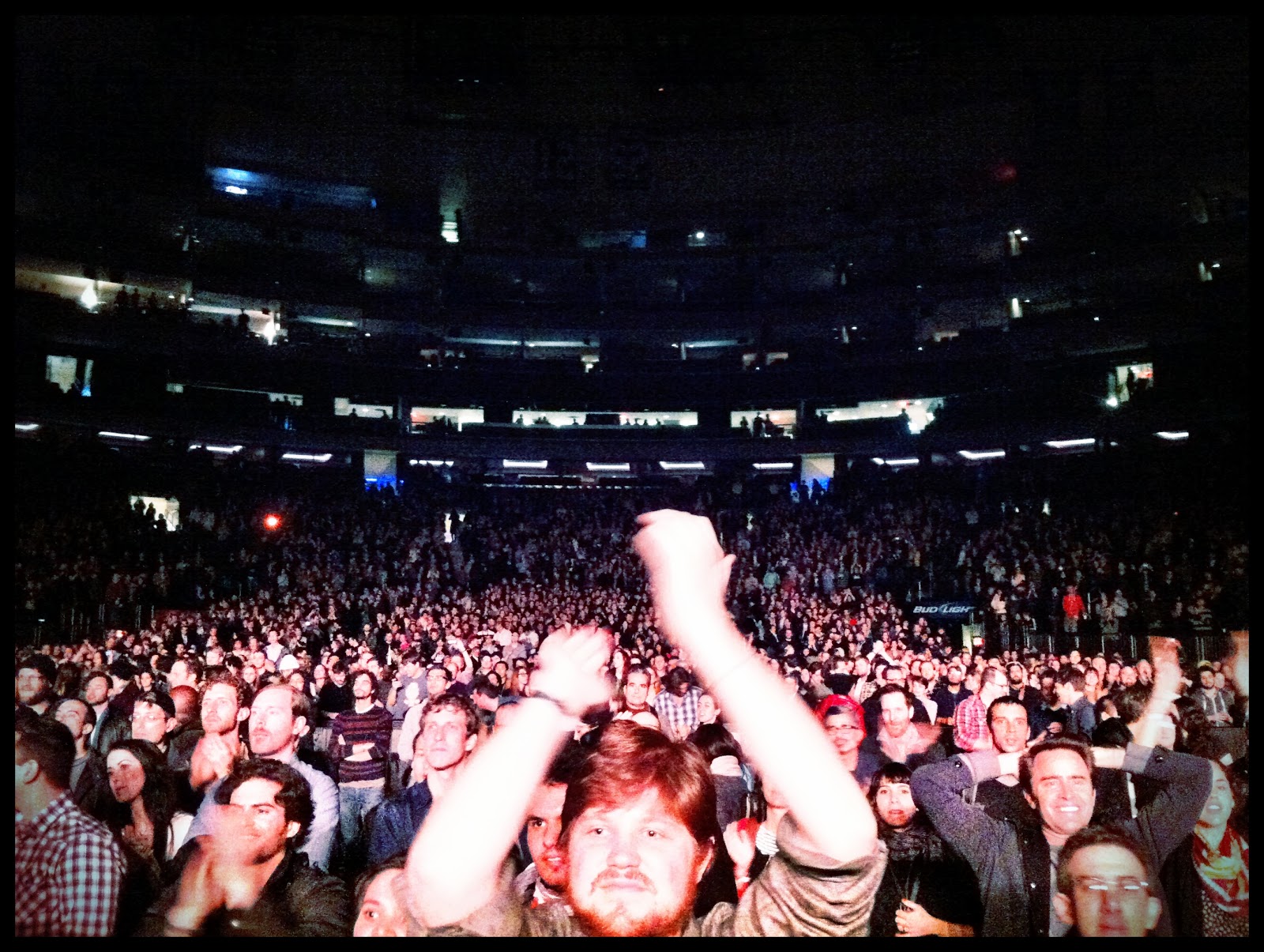 In a daze, I made my way through the crowd toward the exit for our area.  My mouth was dry from hanging open in awe.  I figured a bathroom break and beer run were in order.  As I left our section, I made a point to ask the security guard which way to go.  Figured, "He'll remember me and won't ask to see my ticket."  He pointed me in the direction of a tunnel.  I thanked him and kept it moving.  When I turned the corner I realized how the other half lives at these big shows.  The bar was called the "Backstage Bar".  There was barely anyone there.  The bathroom was spacious and clean.  I thought, "Yup. I'm where I belong."  Feeling great, I scooped up a couple beers, throwing in a substantial tip (wanting to feel like a big deal), and strolled back the way I came.  "Where's your wristband?" the guard asked.  "Wristband", I said, "what are you talking about?"  He informed me I needed a wristband to enter that section.  "You just saw me leave!" I said.  He agreed he'd seen me and talked to me, but told me I still needed a wristband.  I could feel the perfect night about to turn sour.  For a moment I figured I was shit out of luck.  Suddenly, something in me snapped.  Instead of hesitating in fear, I channeled the confident asshole inside me and unleashed him on the guard.  "No one gave me a f*cking wristband!  What are you talking about? My friend has my ticket.  He got them for us through his job.  I just went to grab a couple beers for the encore.  I'm not gonna wander around out here like an idiot.  I'm in this section pal. This is ridiculous."  With that I walked by him and didn't look back.  I'm not normally an asshole, but sometimes you've just got to play the role. 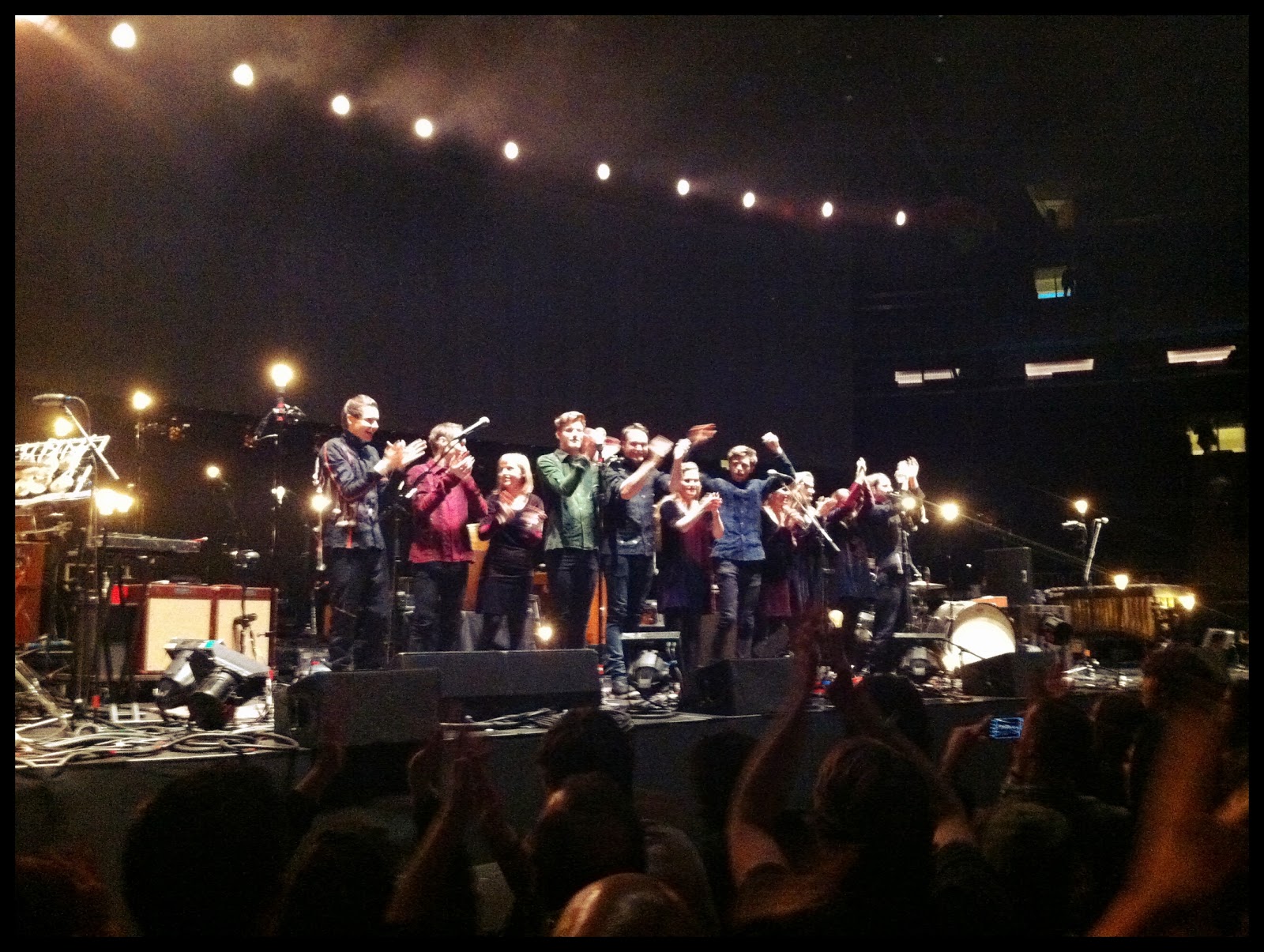 When I say this show was incredible, I mean it.  Don't believe me?  Google it and read the reviews.  I find it mind blowing that an ambient/post rock band from Iceland, whose lyrics are a mystery to most Americans, can fill the Garden and make such a deep impression.  And after almost 20 years of playing together, I can't imagine their feelings about finally growing a fan base big enough to play NYC's biggest venue.  They'd been saying for weeks leading up to the show that they were going to do everything in their power to play the show of their lives.  I'd never seen them live before this show, but I can't fathom them sounding better.