Matmos is Drew Daniel and Martin Schmidt.  They are a highly experimental electronic music duo.  They are also a couple.  Theirs is a story that proves there is someone for everyone out there.  Before they met, both of them made sound collages on the cheap, maximizing what they could afford.  Both used six tape recorders to "track" music by playing the sounds on five and recording the mix onto the sixth.  They were each doing this at the same time in the early 90s.  It was soon after that they found each other.

Martin and Drew were socially awkward and bullied as kids.  Both developed an interest in hardcore and industrial music.  Martin got a gig programming drums for a goth industrial band.  The other members wore a lot of dark make up and black leather.  Not Martin. He dressed like a suburban square.  Picture Drew Carey working the drum machines for Alien Sex Fiend.  One night his band was playing a warehouse party and he caught Drew's eye.  Not long after that, Drew caught Martin's attention when he was go-go dancing in a homemade, plastic fish jock strap.  Martin tucked a dollar into his g-string and the rest is history.  Now, decades later, they're a happy couple who've made, and continue to make, music that explores uncharted territory.  Calling them "made for each other" isn't cliche, it's a fact.

They've crafted over 10 albums, but Matmos have two things on their resume they're "known" for.  First, they were handpicked by Bjork (a big fan of theirs) to help in the creation of Vespertine, her stellar album from 2001.  The album was a major success.  They toured the world for over a year as part of her band.  I watched an interview where they admitted they were terrified at first.  They went from playing for tiny crowds in a microscene to sell out shows of thousands.  They also admit being happy when it ended so they could go back to doing whatever they pleased, as opposed to being hired guns. Watch the video above to see their performance of "Unison" with her at the Royal Opera House in London.

The second thing a music nerd may know about Matmos is their album "A Chance to Cut Is A Chance To Cure".  To create it, they went to plastic surgery clinics and recorded the sounds of things like bone saws, hearing tests and liposuction procedures.  They then matched these samples with things like a straw blowing bubbles in a bowl of water and a saxophone.  If that's not enough, there's a track on the album dedicated to their pet rat who had recently died and made from the sounds of them "playing" his cage.  Check out their video for "California Rhinoplasty" above.  It's a cut (pun intended) from the same album. 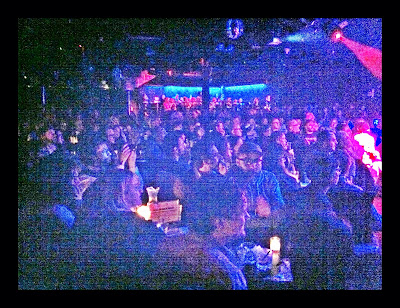 Le Poisson Rouge was packed from front to back.  I slithered my way to the bar and got a glass of this.  To my pleasant surprise, a french woman next to me complemented my choice of drink, pulled out some high end chocolate and broke off a hunk for yours truly.  A perfect pairing.  After thanking her and sharing a toast to good taste, I posted up stage left for what I knew would be a unique night. 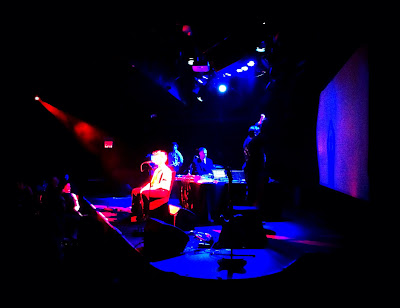 Matmos got things rolling with Very Large Green Triangles.  The lead guitarist from their opening band, Horse Lords, sat front and center donning a pair of headphones.  While he hummed and seemed to answer random questions he was being asked in the headphones, Matmos slowly constructed the music behind him.  Drew would occasionally stand up and spin with a brooding intensity, holding up a green glass triangle for all to see.  It made for a funny and surreal start to the performance.  Slowly the song took shape and grew until it reached a thumping peak of fuzz with green triangles popping up and flying across the projection screen.  Truly fun stuff. 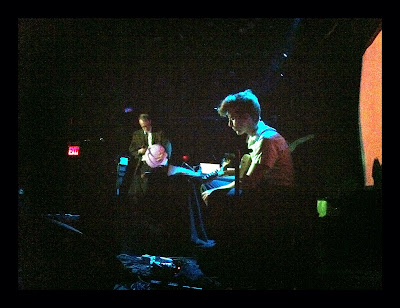 Over the course of their set they played a surprisingly diverse collection of styles.  They covered a hardcore song.  One selection sounded like Sun Ra doing acid jazz.  There was a big beat banger with an industrial vibe.  They even had a song end with a country sounding twang and a Johnny Cash sounding guitar.  Not only was the sound of the setlist diverse, so were the methods they used performing it.  The photo above shows Martin playing a balloon's hole.  He was manipulating the escaping air.  He did this with his hands and his mouth.  Then, after tying it a couple of times and getting some sounds from that process, he played the outside of the balloon with his fingers and palm.  Drew captured the sounds and manipulated them, looping them into a head knocking beat nothing short of genius.  They summed up their process in an interview I saw.  Martin is the food, Drew is the stomach, and the speakers are the ass. 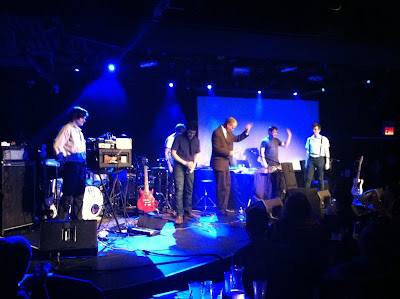 If you ever get the chance to check out Matmos in your area, I highly recommend it.  It's like going to see science teachers you wish you'd had in college make music to feed your brain and warm your heart.  Their stage presence was a rare mix of humor and intelligence.  The audience loved them from beginning to end.  When I spoke with Martin briefly after the show he was incredibly kind and appreciative.  Overall, I'd say this show's quality far exceeded the $13 ticket price.

Read about one of their heroes, Pierre Henry.