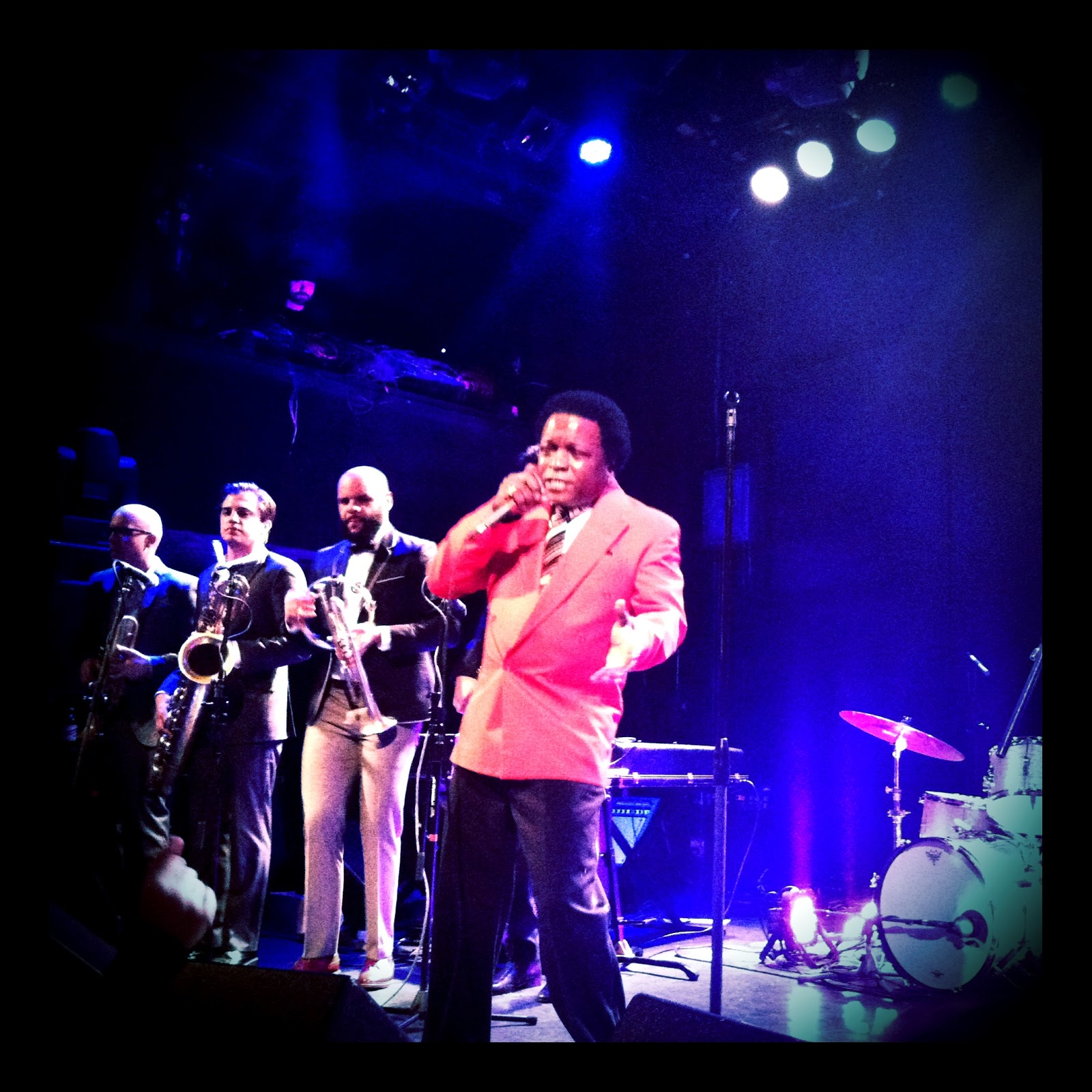 When most folks think of soul music they think of records cut decades ago by artists who are no longer with us.  Marvin Gaye.  Otis Redding.  Sam Cooke.  James Brown.  Curtis Mayfield.  Sure, their influence can be heard here and there in contemporary music, but the soul man seems to have gone the way of the dinosaur.  Well, I'm here to tell ya, they aren't all gone.  You just need to dig a little deeper.  Last year, I fell head over heels for Charles Bradley, who blew my mind at a show in Pittsburgh.  The other night my wife and I had the pleasure of seeing Lee Fields and the Expressions, another full on, no bullshit, real deal soul singer and his band. 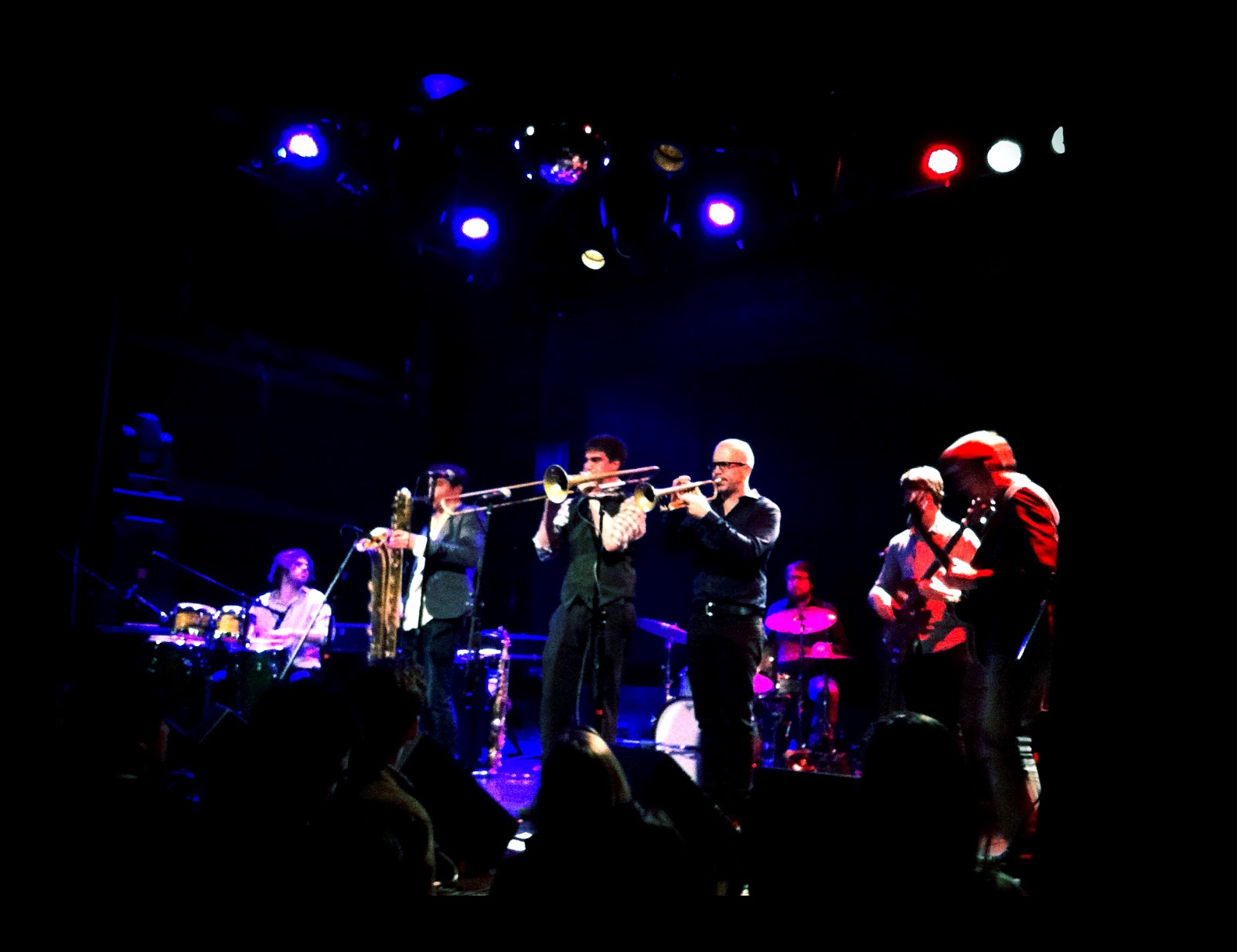 Jenny and I were dancing from the moment we entered the ballroom.  Ikebe Shakedown, pictured above, were the opening act and they had it cooking.  Band members took turns taking the lead over consistently tight bass and drums.  Afrobeat, funk, and jazz were melded together to make for one hell of a hip shaking set.  People were dancing and yelping in approval.  We were so impressed we picked up their self titled debut album at the merch table.  To read more about them, click HERE. 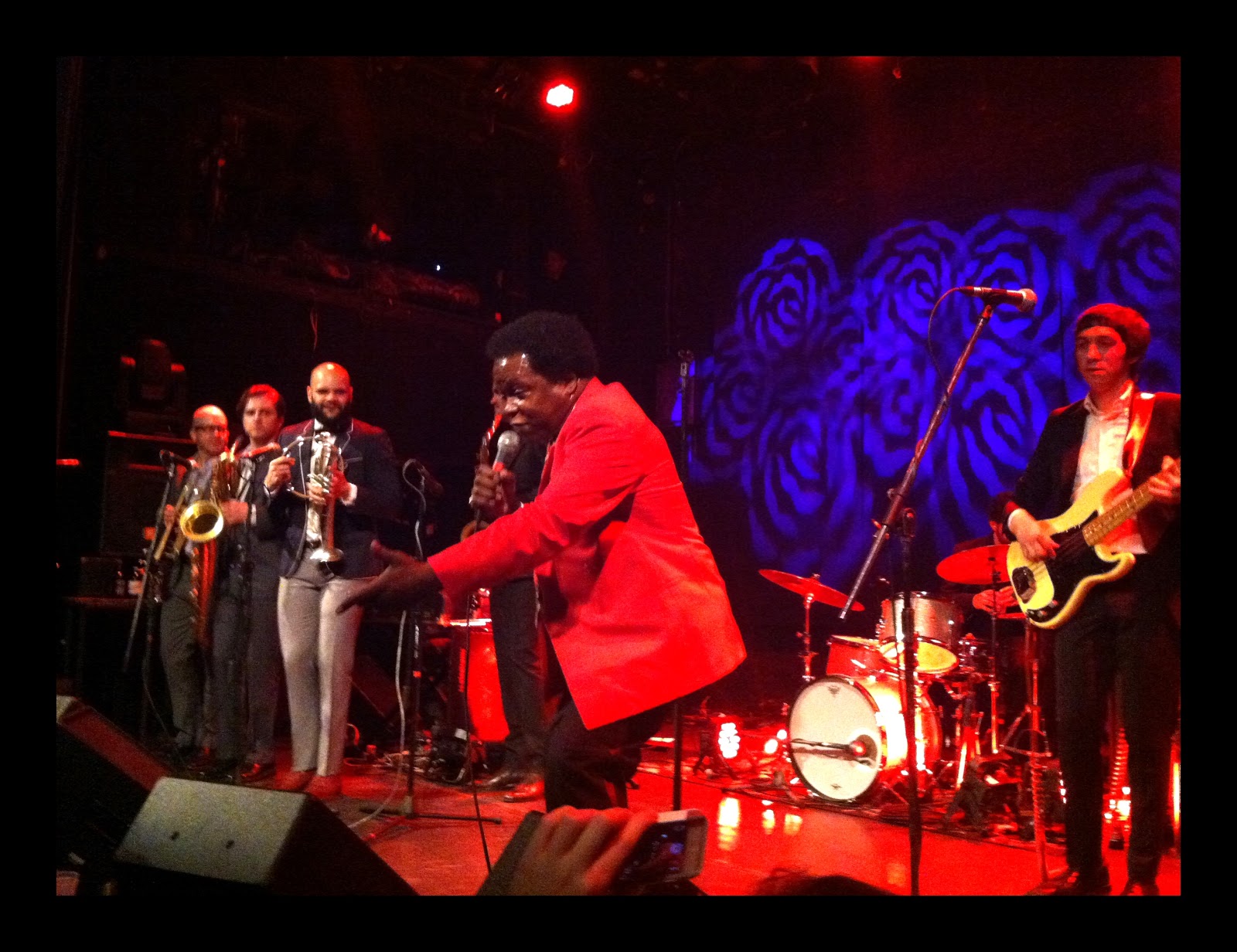 Ikebe Shakedown got things heated up.  Lee Fields set the place on fire.  He came out looking sharp in a bright red suit jacket.  Over the course of his hour and a half set, he belted ballads while wiping away tears, sang to ladies in the front while holding their hands, spun circles and stopped on a dime while dancing, etc.  In interviews he talks about wanting to give people their money's worth.  He definitely delivered on Friday night.  It wasn't novelty or nostalgia.  It was authentic and sounded fresh.  It wasn't stiff and overly self aware.  It was fun and warm.  Lee didn't sound tired and old, he sounded invigorated and in his prime.  His joy was infectious.  Smiles were everywhere.  Almost everyone was dancing.  Lee repeatedly told the crowd, "I love you!"  It was obvious the feeling was mutual. 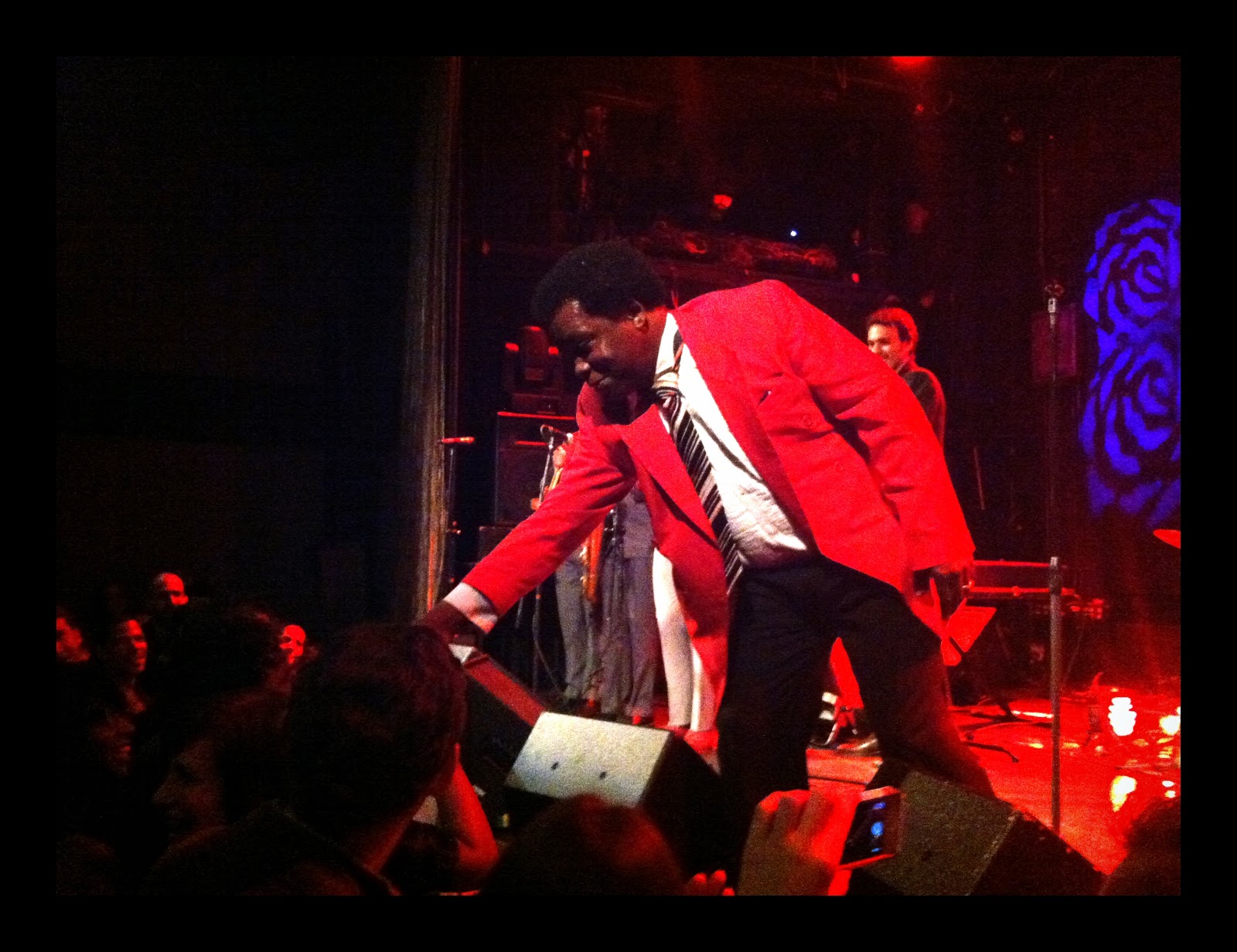 At the end of the show, as the place screamed, he waved goodbye.  He slowly made his way to the small set of stairs stage left.  Suddenly, he spun back around, ran toward the mic, and began belting again.  The place went wild.  Then, he made his way toward the stairs again.  He waved.  The crowd screamed.  Again he ran back to the mic and let out a great wail straight from the soul.  This played out 4 or 5 times and summed up the overall vibe of the show.  He makes you fall in love with him and he gives that love right back.  We didn't want him to leave and he didn't want to go.  It felt like we'd all connected on a deep level.  That's what soul music is about and it's a beautiful thing when it's real. 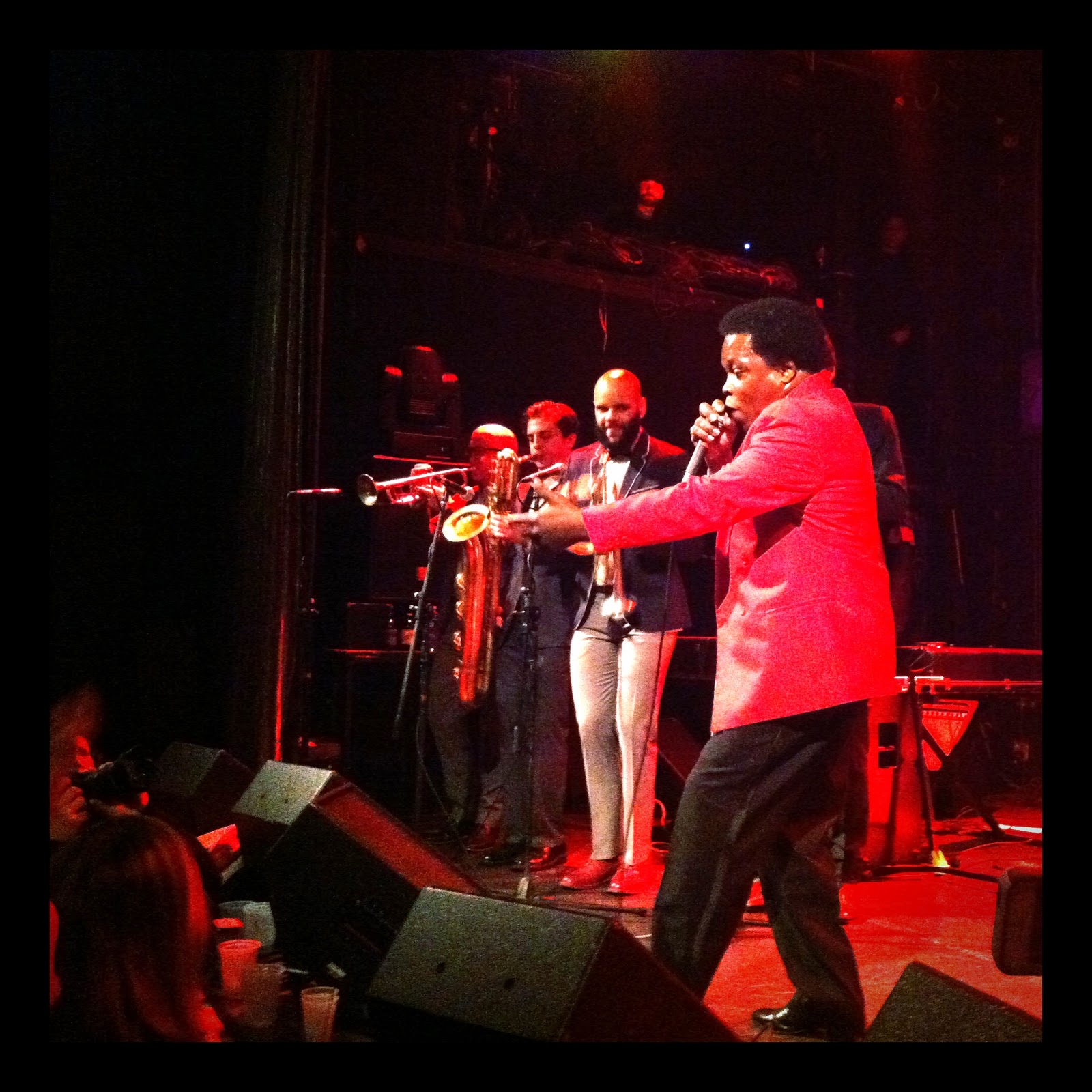 Lee's been doing his thing for over 40 years, but his isn't a story of times gone by.  He's making the best music of his career right now.  His band is incredible.  His voice is getting better with age.  Soul music isn't dead.  It's alive and well and lives in Lee Fields.