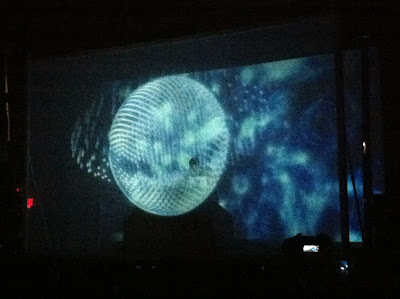 Flying Lotus brought his Layer 3 Tour to Terminal 5 on Sunday night.  The talented beat maker/producer is promoting his latest critically acclaimed release "Until the Quiet Comes", which dropped in September.  The album, his fourth, proves him to be one of the most dynamic electronic artists making music right now.  From the textures of his percussion to his choice of samples, his tracks create new worlds with rare depth in a genre cluttered with cliches and cheap thrills.  Flying Lotus, real name Steven Ellison, is the grandnephew of Alice Coltrane.  With genes like that it's not surprising his sound is rich with jazz influence and artistic ambition.  On Sunday he served up a feast for both the ears and eyes.  Check out the video below for a look at the unique visual concept of his current tour: 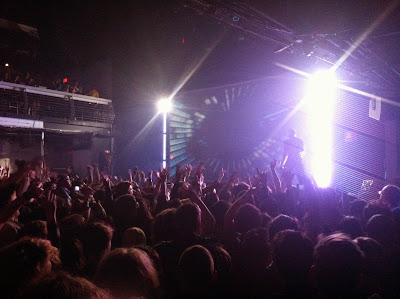 FlyLo clearly took the stage at Terminal 5 ready to make Sunday night feel like a Friday or Saturday.  It was a Red Bull Music Academy event, so maybe he shotgunned a couple cans of the stuff before taking the stage.  Whatever it was, the introspective cuts in his catalog were few and far between.  Instead, he mixed his uptempo stuff with thunder from other artists like TNGHT & Kendrick Lamar to turn the place into one big party.  A bouncer the night before had told me to expect a lot of energy and a crowd high on more than just music.  His prediction proved true.  The place was a jam packed sea of heads and hands, bouncing bodies and the smell of burning trees thick in the sticky air.  Lotus soaked up the energy and funneled it into his performance.  When he wasn't sandwiched between the projection screens, he stepped out of the "layers" and became Captain Murphy, his MC persona.  He'd work the room for a bit, flowing abstract rhymes over frenetic beats, before returning to the cockpit to increase the altitude. 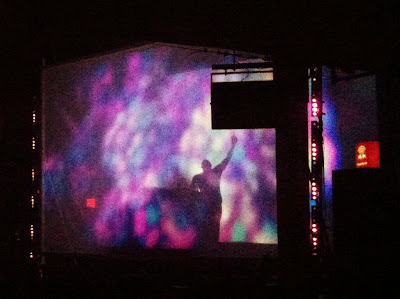 I had high expectations for this show going in.  Lotus surpassed them.  Take it from me, he killed it.  Can't wait to see him next time he's in town.