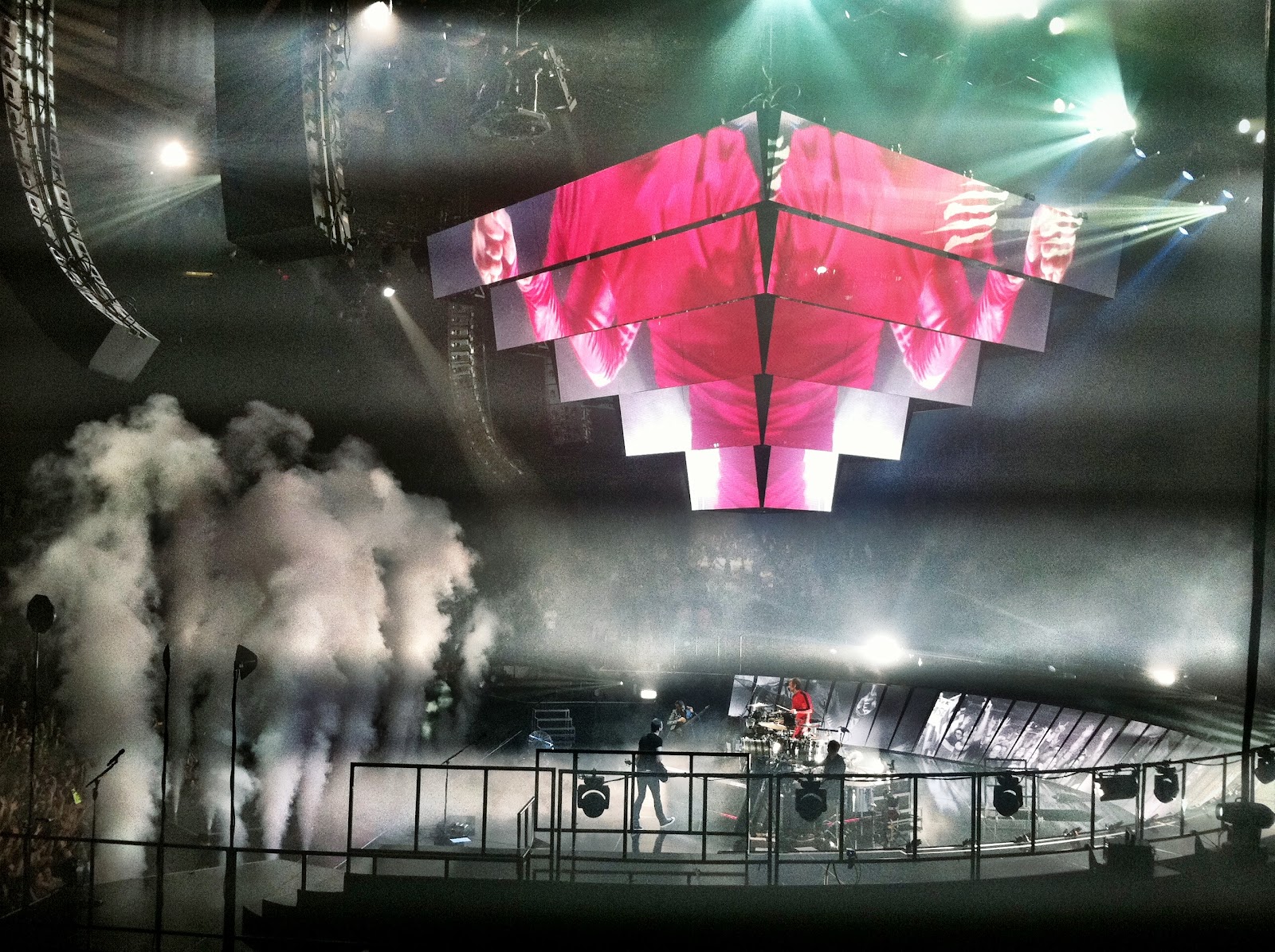 Big shows don't have the appeal they once had for me.  When I was younger and went to a show, more people = more excitement.  As I've gotten older, I prefer the intimacy and better sound quality of smaller venues.  However, some bands are just too good to miss because they have what it takes to take over an arena and play music large enough to fill it.  Muse is one of those bands.  Their sound is huge, their stage sets are consistently stunning, and their catalog has enough range to make for a well rounded spectacle.  It's no surprise the Brits back home have named them best live act multiple times.  These guys belong in the big leagues. 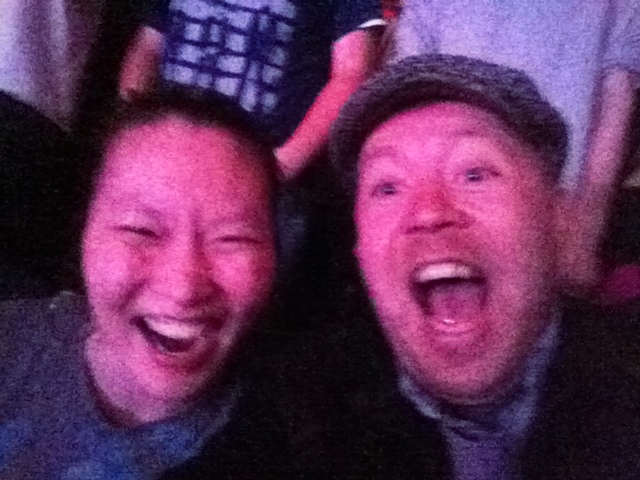 Jenny and I had lady luck shine on us early.  The picture above shows how we felt about it.  We arrived and took our seats.  They were 8 rows from the back wall in the nosebleeds.  Not exactly prime seating.  Moments after the lights went out and the drone of the opening sequence started, a woman in a green MSG jacket tapped our shoulders from behind.  "Want to sit lower? Close to the stage?"  "Um.....yes?"  "Here.  Have fun."  With that, we were suddenly holding tix for the 12th row, stage left.  What?!  No clue what we did to earn the good fortune, but we were beyond happy to accept it as a gift from the music gods.  After some escalator riding and a short jog, we were suddenly sitting pretty in seats close enough to toss Matt Bellamy a football. 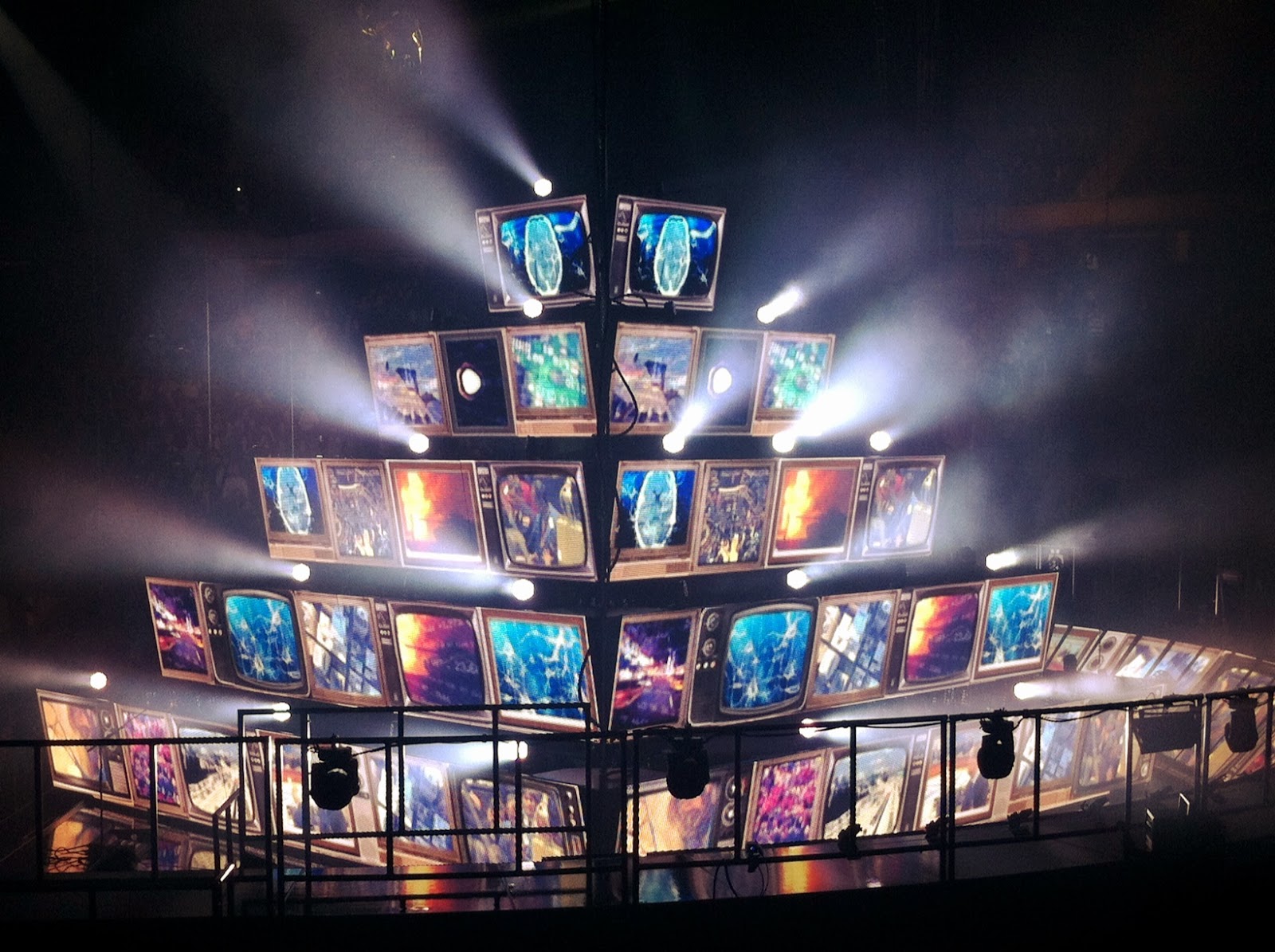 The show started with a giant LCD pyramid that slowly rose to reveal the band within.  The screens were hoisted up into a variety of configurations throughout the show and provided a colorful canopy of recorded and live footage.  There were also lasers, giant screens ringing the stage, smoke cannons, and a catwalk to a platform in the crowd.  Like I said, Muse knows how to put on a big show. 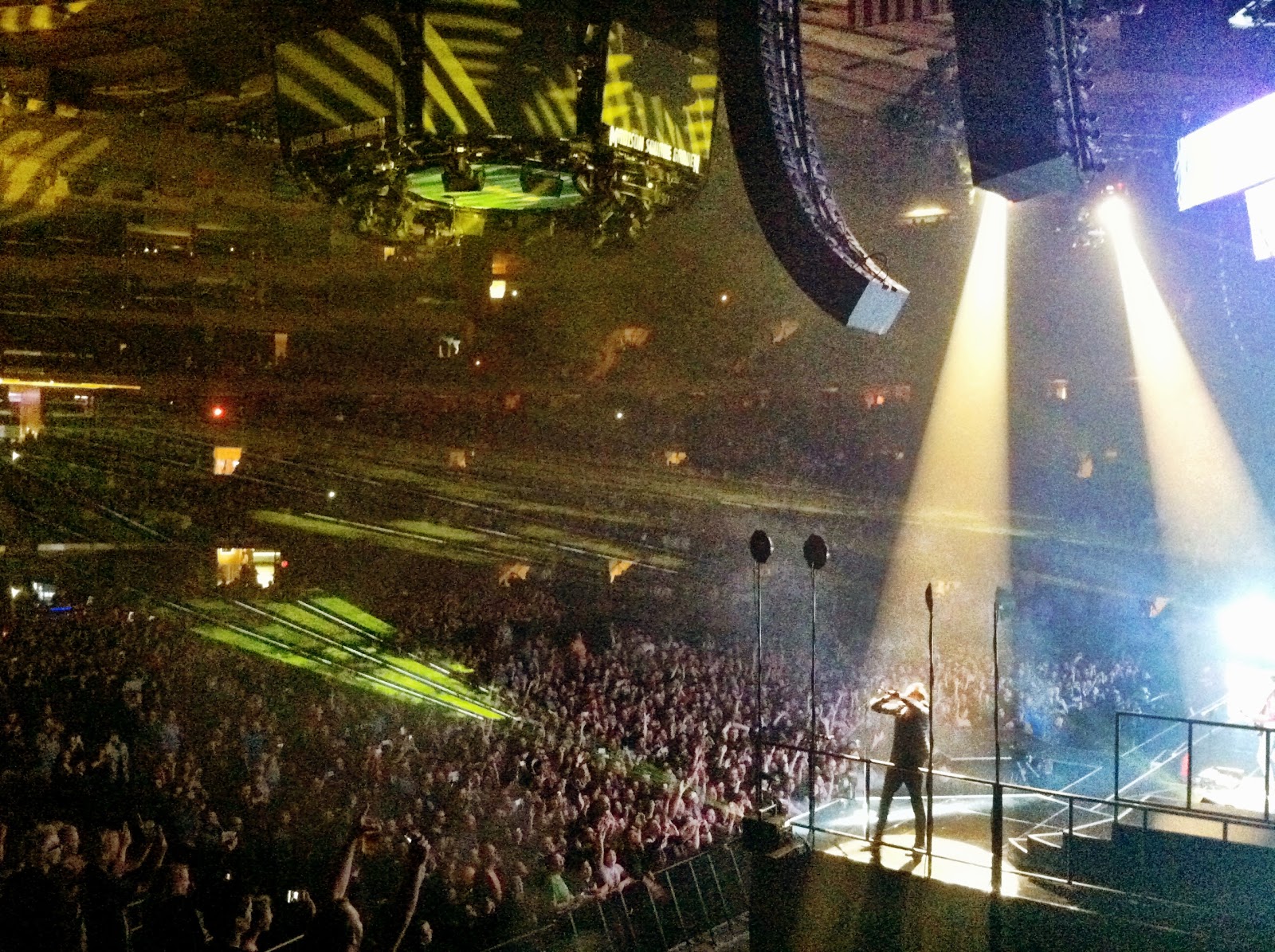 Under all the theatrics and grandeur, Muse actually address serious contemporary issues.  Most of today's popular music is either cryptic or centered on the individual (love, loss, desires, etc.)  Matt and the boys write about income inequality, global warming, overpopulation, the end of mankind, political propaganda, and the need of the repressed to fight back.  Their feelings are then laced into soaring anthems that cushion the message and make it go down easy.  That's how songs of theirs encouraging rebellion end up on Primetime TV. 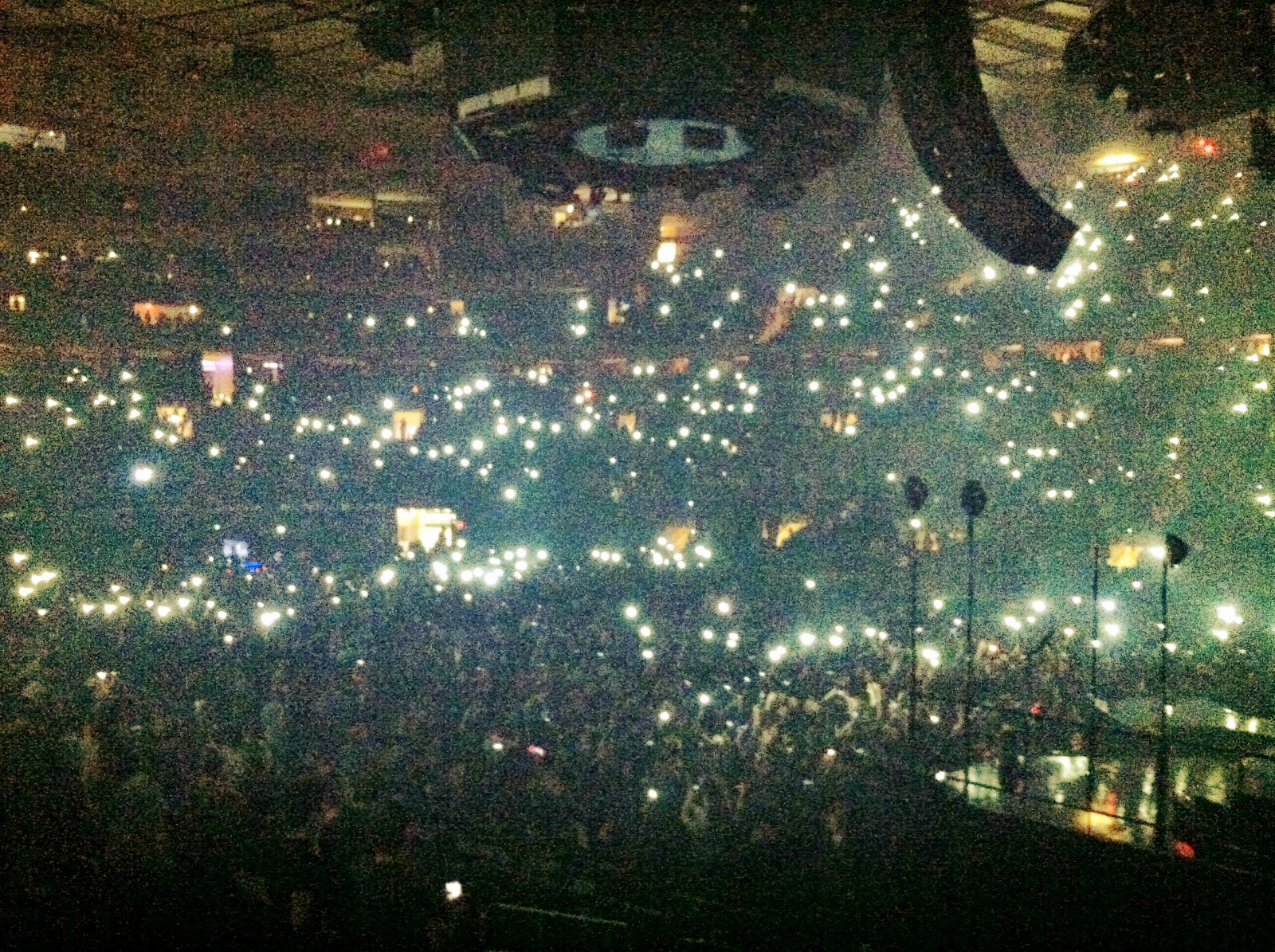 The show was a perfect blend of songs from throughout their long career.  Jen and I were happy they didn't go too heavy on the new album, which is definitely not their best.  They even played "Stockholm Syndrome" from 2003.  Love that song.  Before the first encore, the crowd spontaneously began holding up their glowing phones.  I'm a sucker for that sort of thing.  Looked beautiful.  Muse clearly dug it too when they returned to the stage, acknowledging the lights and professing their love of NYC.  Their love of the Big Apple showed in the performance they gave from the opening song to the last.  Matt seemed especially into it.  He jumped down in the front of the barriers, shaking hands and taking pictures with fans for an extended period of time.  He also slid on his knees across the stage during a couple of the solos.  The crowd ate it up and responded by consistently singing along, bouncing up and down, and pumping their fists in unison. 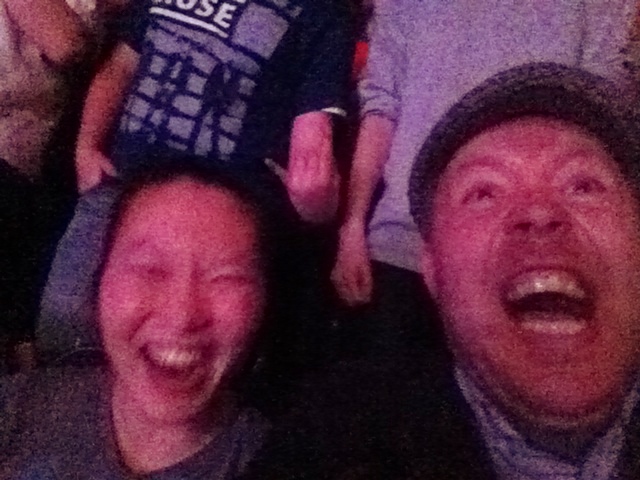 This was our third time seeing Muse and once again we thoroughly enjoyed ourselves.  The picture above says it all.  Still can't believe the seating upgrade we got.  Thank you gods of the Garden!