People have been telling me for years that I need to go to New Orleans.  "You will fall head over heels," they tell me.  And every time someone gives me the pitch they always bring up the music.  I have yet to visit the Big Easy, but I've had memorably good times to music born in Louisiana.  Dixieland jazz and zydeco are two of my favorite genres when the sun gets hot and the days get long.  I fell in love with zydeco years ago in the dance tent of the Grassroots Festival.  My record collection holds a handful of Dr. John records.  I've visited Louis Armstrong's grave in Queens.  Contemporary brass band music, however, is something I've rarely heard and never seen.  Thanks to my buddy Pawel getting tickets, I got a taste of the genre at a small Greenwich Village club. 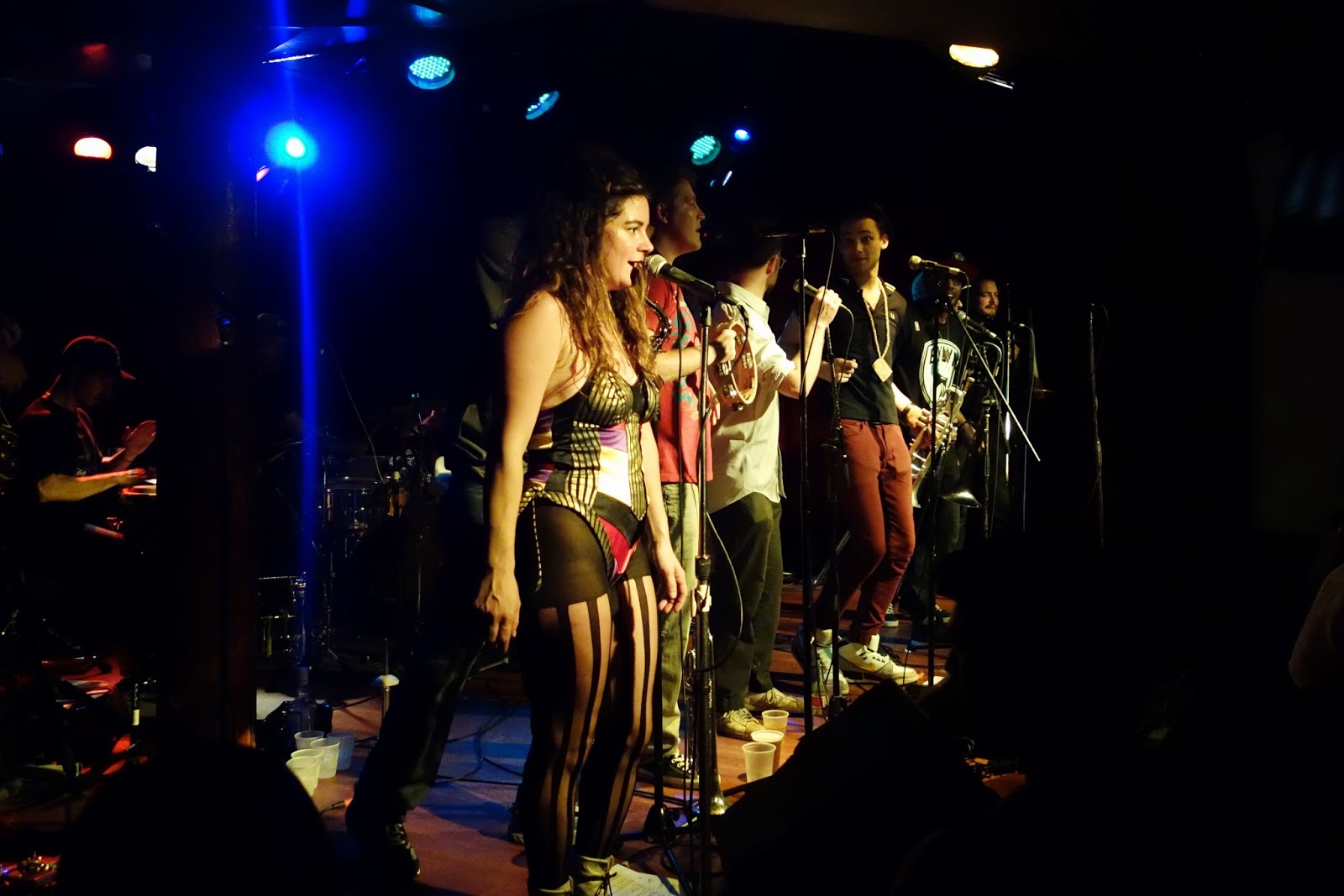 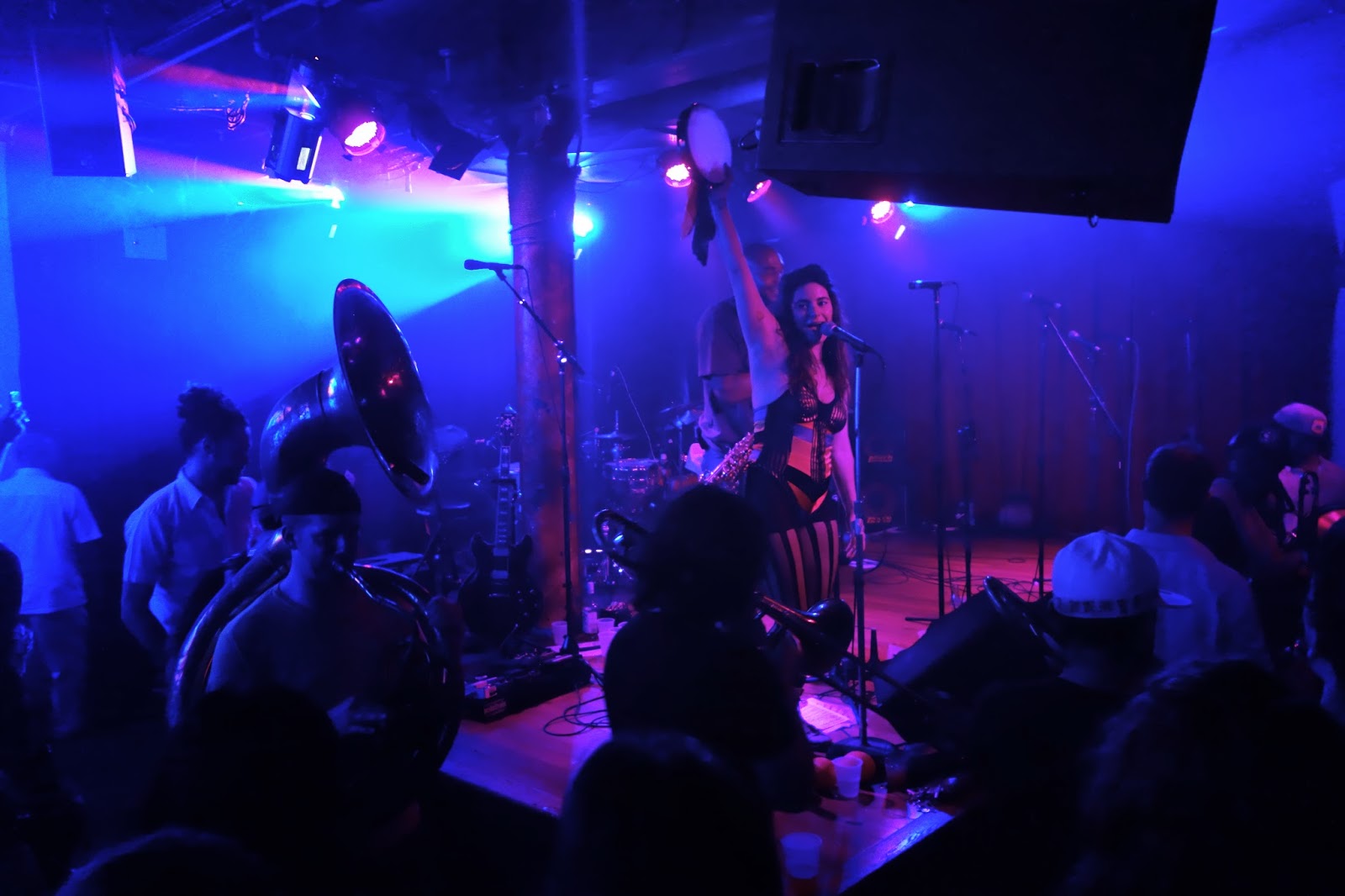 The first act of the night was Brooklyn's own High & Mighty Brass Band.  Entering from the back of the bar, they started things off in the middle of the crowd.  It definitely kickstarted the party and got people moving.  Once they got on stage, the good times kept rolling.  Jamie Neumann, the main singer and lone lady of the crew, was the heart of the band.  Her big smile, eye catching get up and boundless energy were infectious.  At one point she even shook her moneymaker on the bar while shaking a tambourine.  Jamie's enthusiasm inspired the crowd to dance while the band provided a high energy fusion of funk, rock, jazz and hip hop.  High & Mighty showed an impressive ability to shapeshift within each song, blending genres and giving each its time to shine.  Their last songs, like their first songs, were played in the middle of the crowd.  Overall, they were a really fun band to see live.  I'll be keeping an eye out for them. 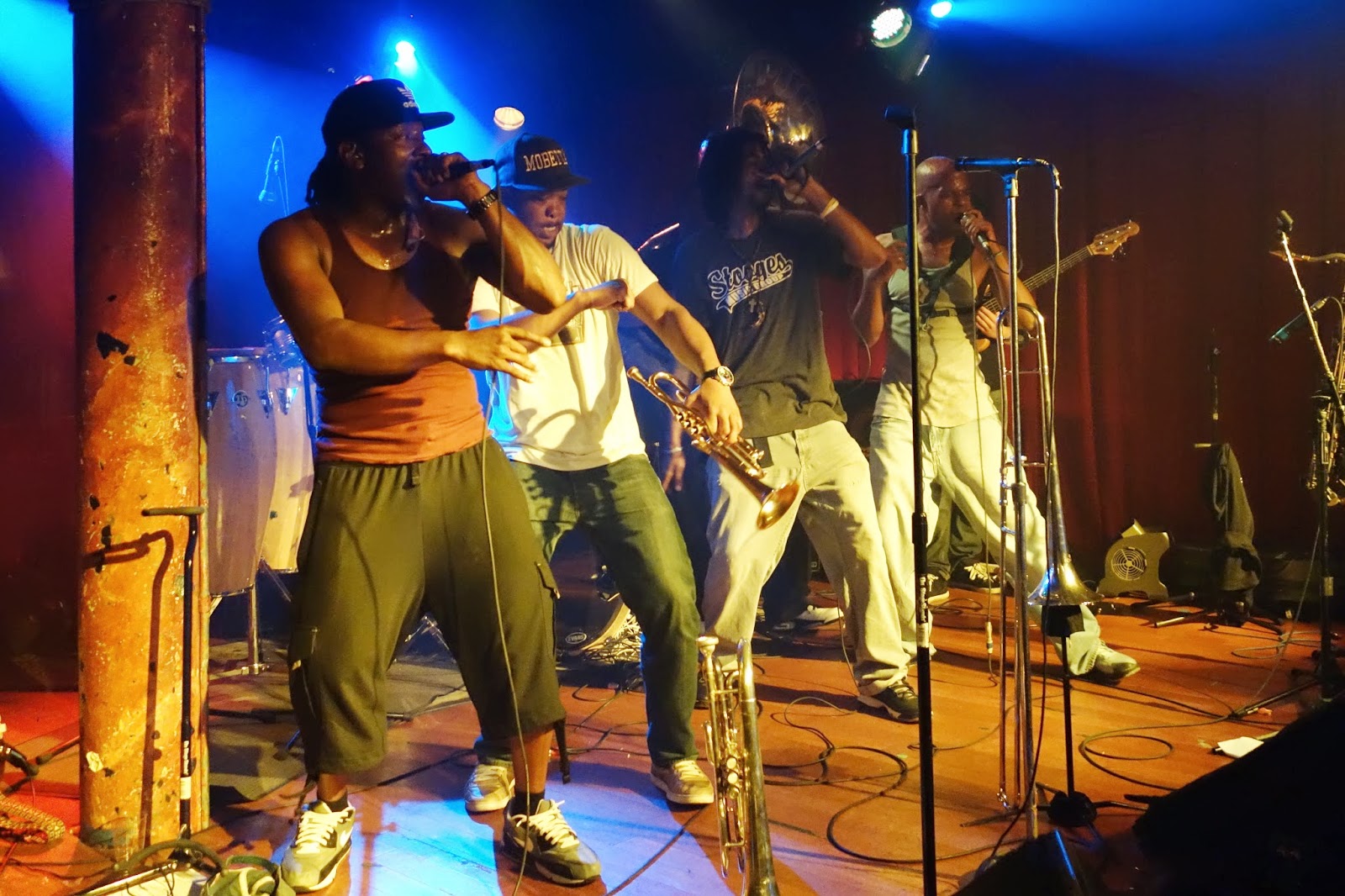 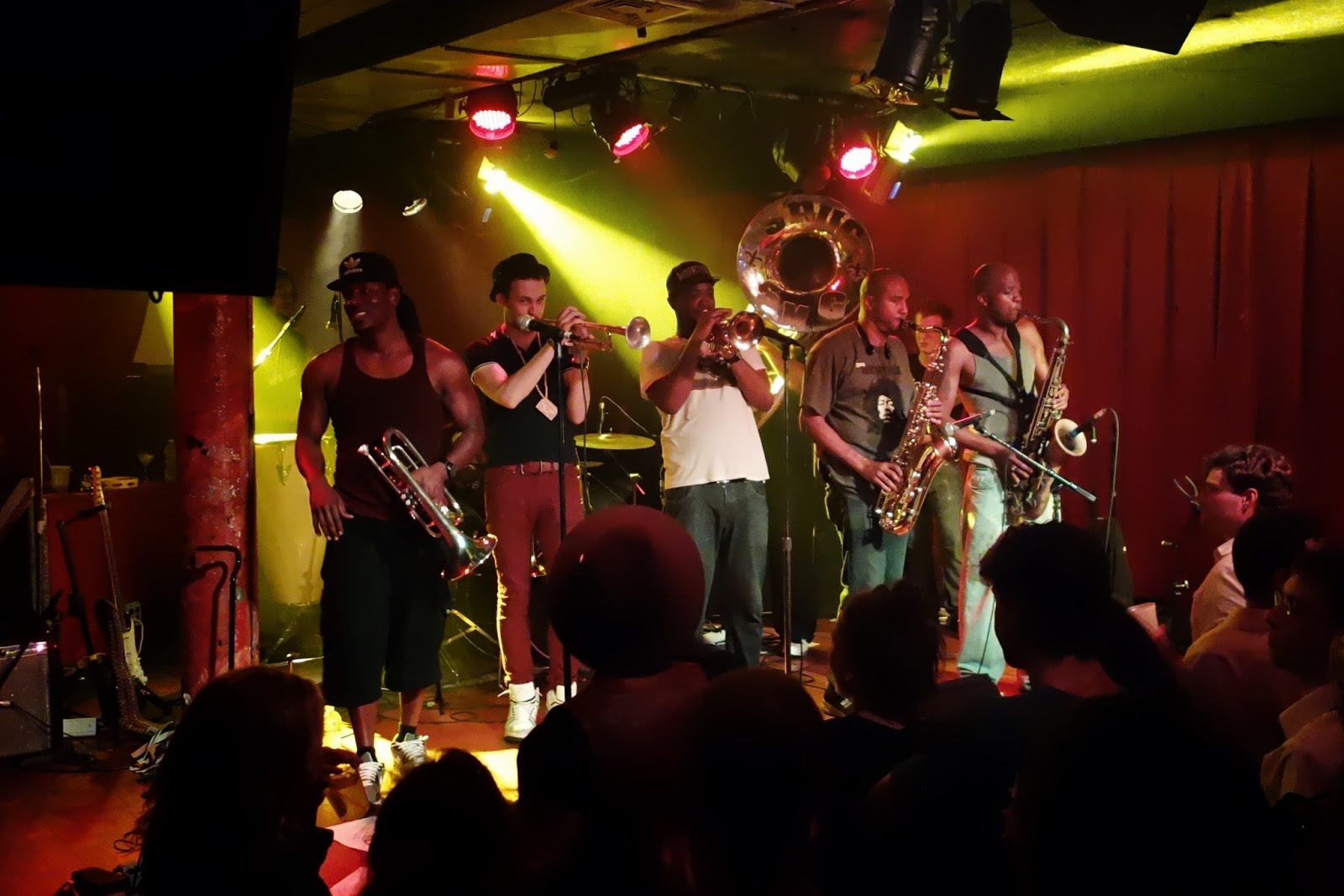 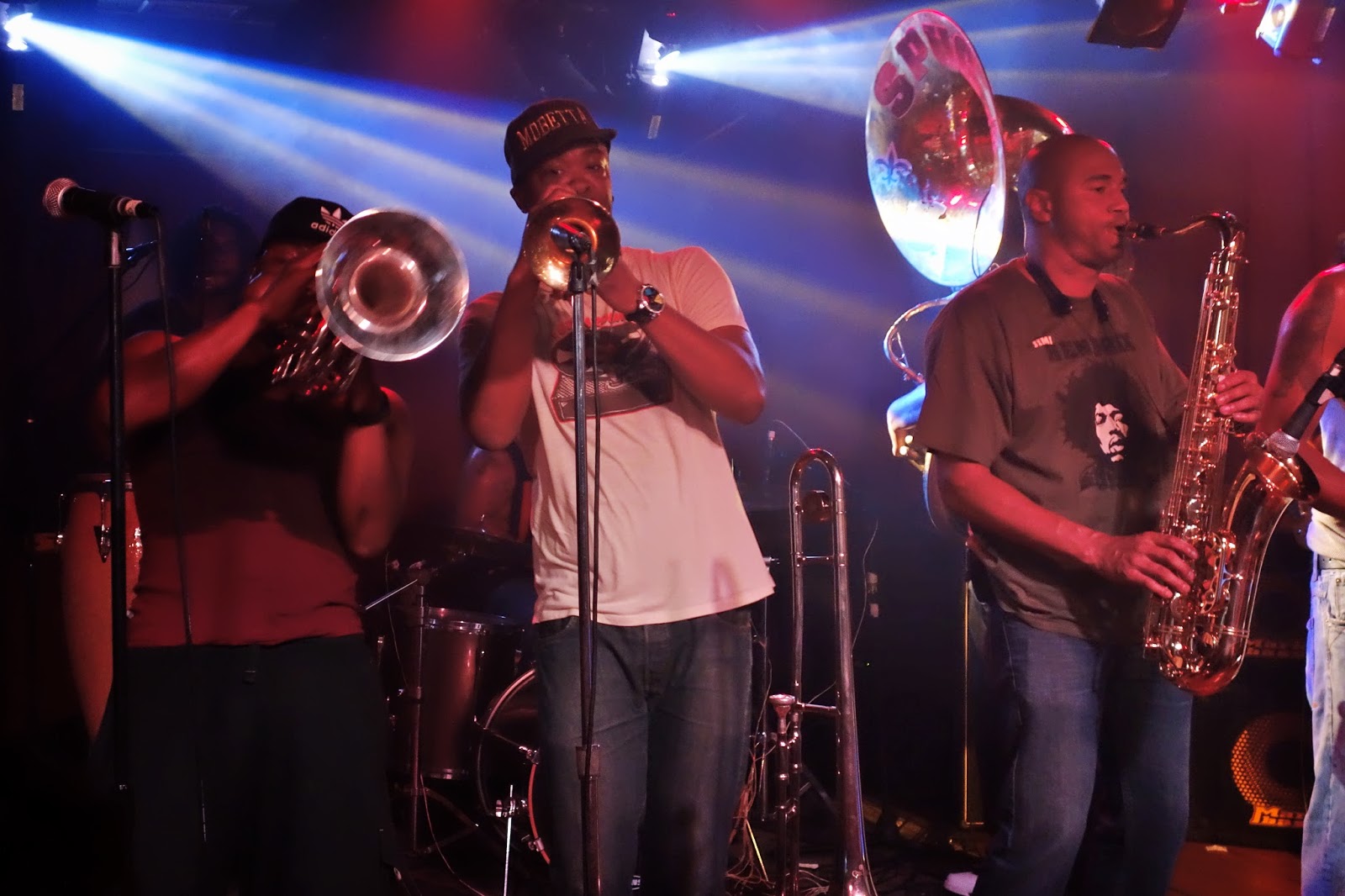 The headliners for the night's festivities were the Stooges Brass Band.  Hailing from New Orleans, they've been doing their thing since 1996 and are known for giving their all when they get in front of a crowd.  Let's just say they lived up to their reputation.  Walter Ramsey, the bandleader, gave a particularly awe inspiring performance.  He played multiple trumpets, killed it on trombone, was the main vocalist, and frequently spit frenetic rhymes.  It was no wonder he was soaked in sweat and went through about 5 bottles of water.  As a group, they were a deeper, more seasoned version of High & Mighty.  Like H & M, they fused funk, jazz, and hip hop into music you could both dance to and get lost in.  They were joined on stage numerous times by the incredibly talented trumpeter and producer Maurice Brown.  His improvisations were highlights of the night.  I'm talking world class.  Maurice was no joke.  Honestly, looking back on the night, there was never a dull moment.  They were high quality from beginning to end.  At some point during hour 3 of their set, we threw in the towel.  "They'll probably go for another hour or so," Pawel said.  If I had eaten dinner, I would have stayed instead of waving the white flag.  The Stooges were just plain incredible.  It's official.  I need to go to New Orleans!