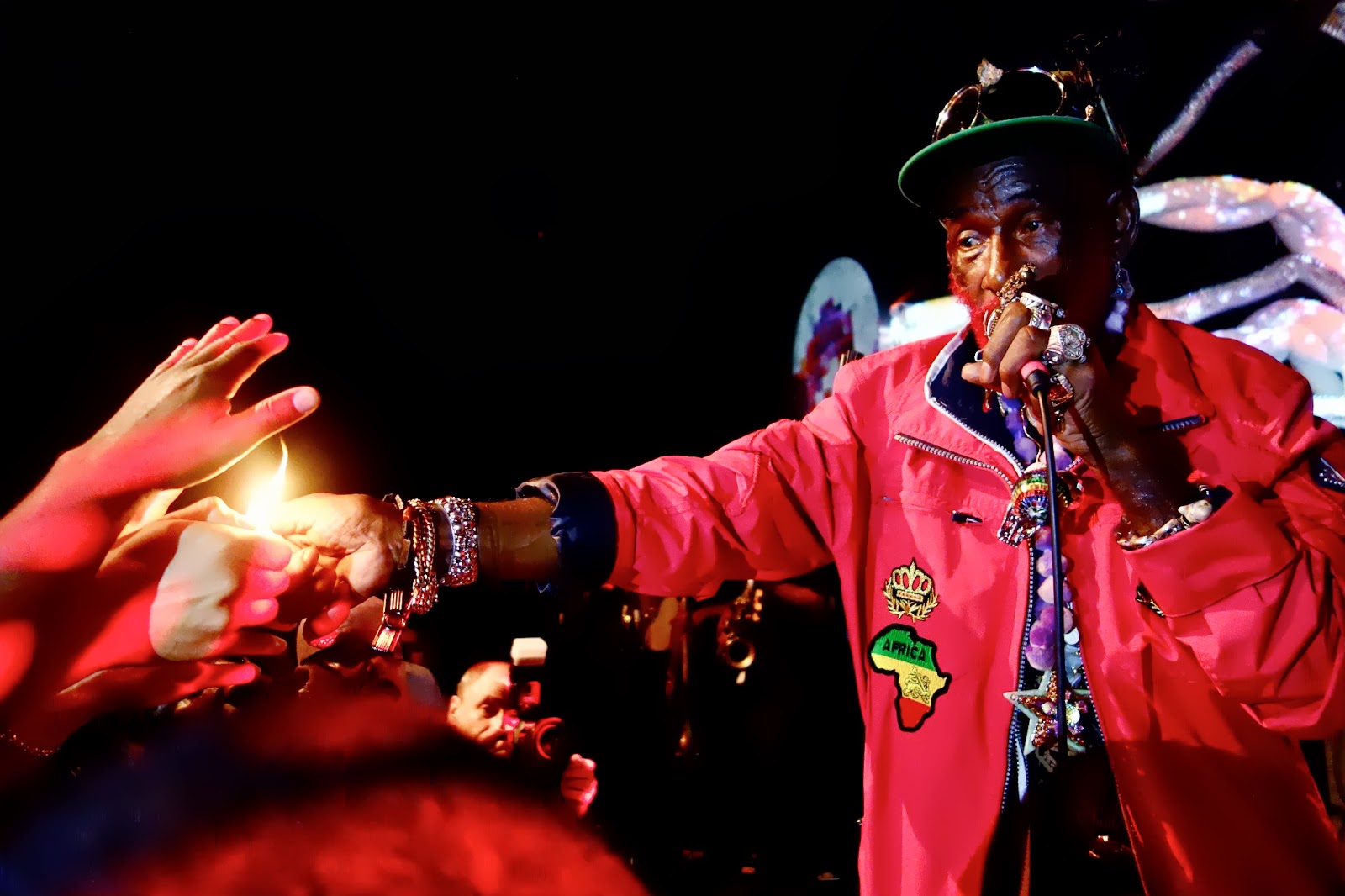 Le Poisson Rouge hosted Red Bull Music Academy's Pass The Gates: NYC in Dub last Thursday night.  It was one of the final events of RBMA's month long invasion of New York that included lectures and performances all over town.  The line stretched down Bleecker Street and around the corner before the doors were even opened for this sell out show.  Surprisingly, I managed to secure a spot against the front of the stage when I got in. 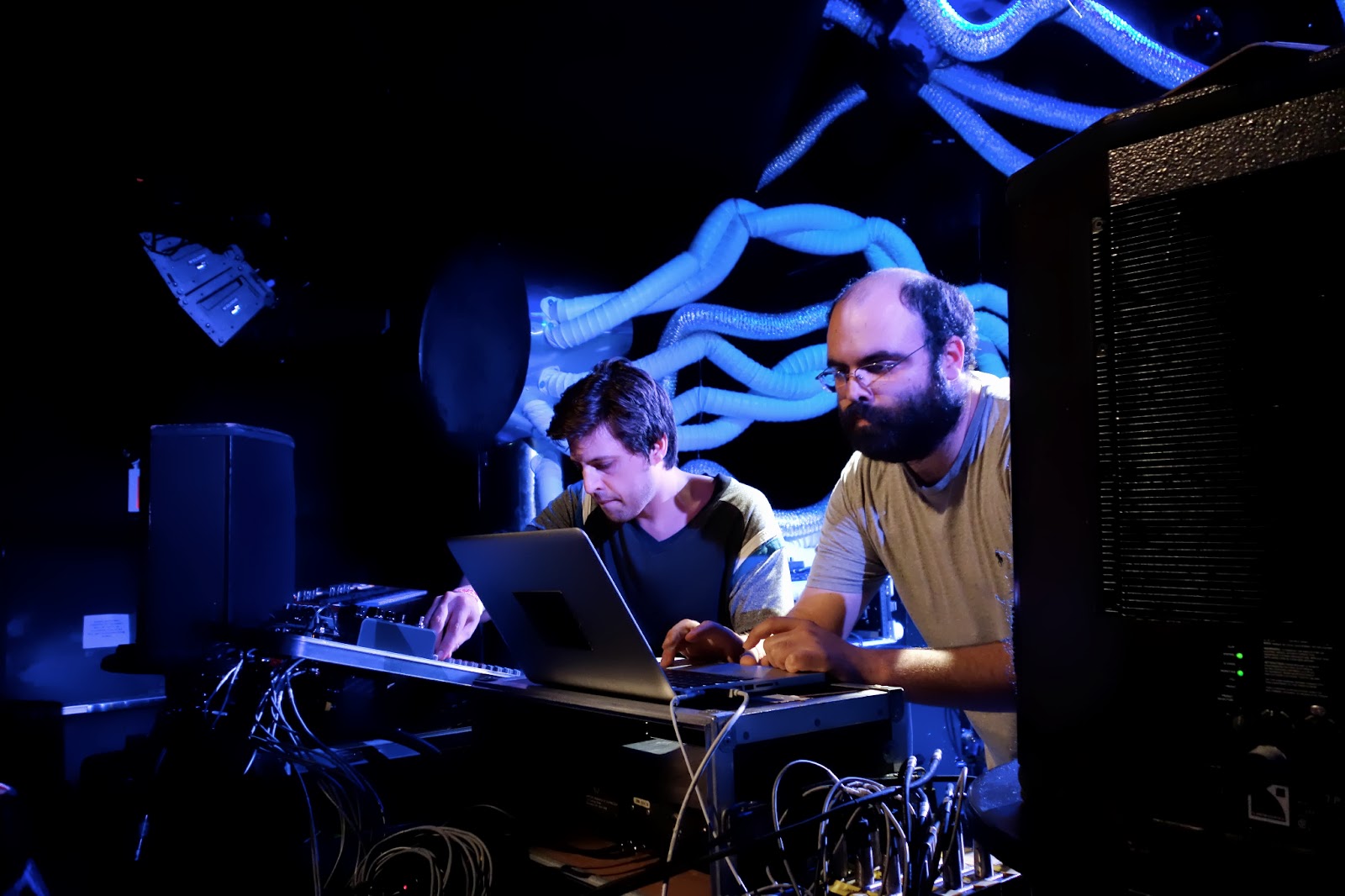 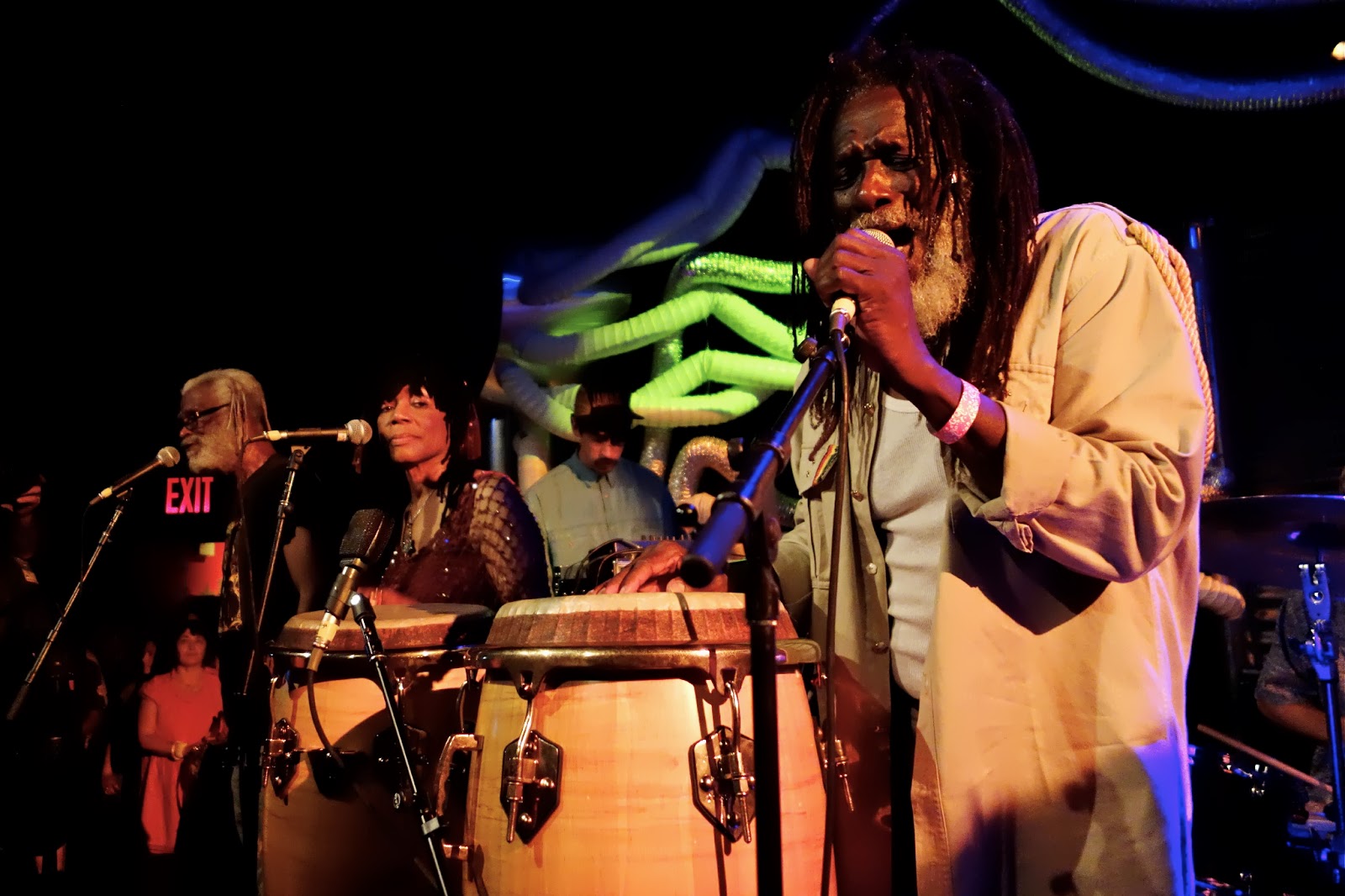 Next up it got real with the legendary Jamaican vocal group The Congos, backed by Sun Araw and M. Geddes Gengras.  Laptops and gadgets were replaced by bongos and microphones.  While the openers played straight for 45 minutes without interacting with the audience, The Congos were touching outstretched hands, smiling, dancing, and showering the place with love from their opening song to their last.  Cedric Myton was out sick, so a female friend filled in for his falsetto.  Would have been nice to see the full original lineup, but they still killed it.  Sun Araw & MGG, the young bucks backing them, were rock solid.  It was a perfectly mixed cocktail of old and new. 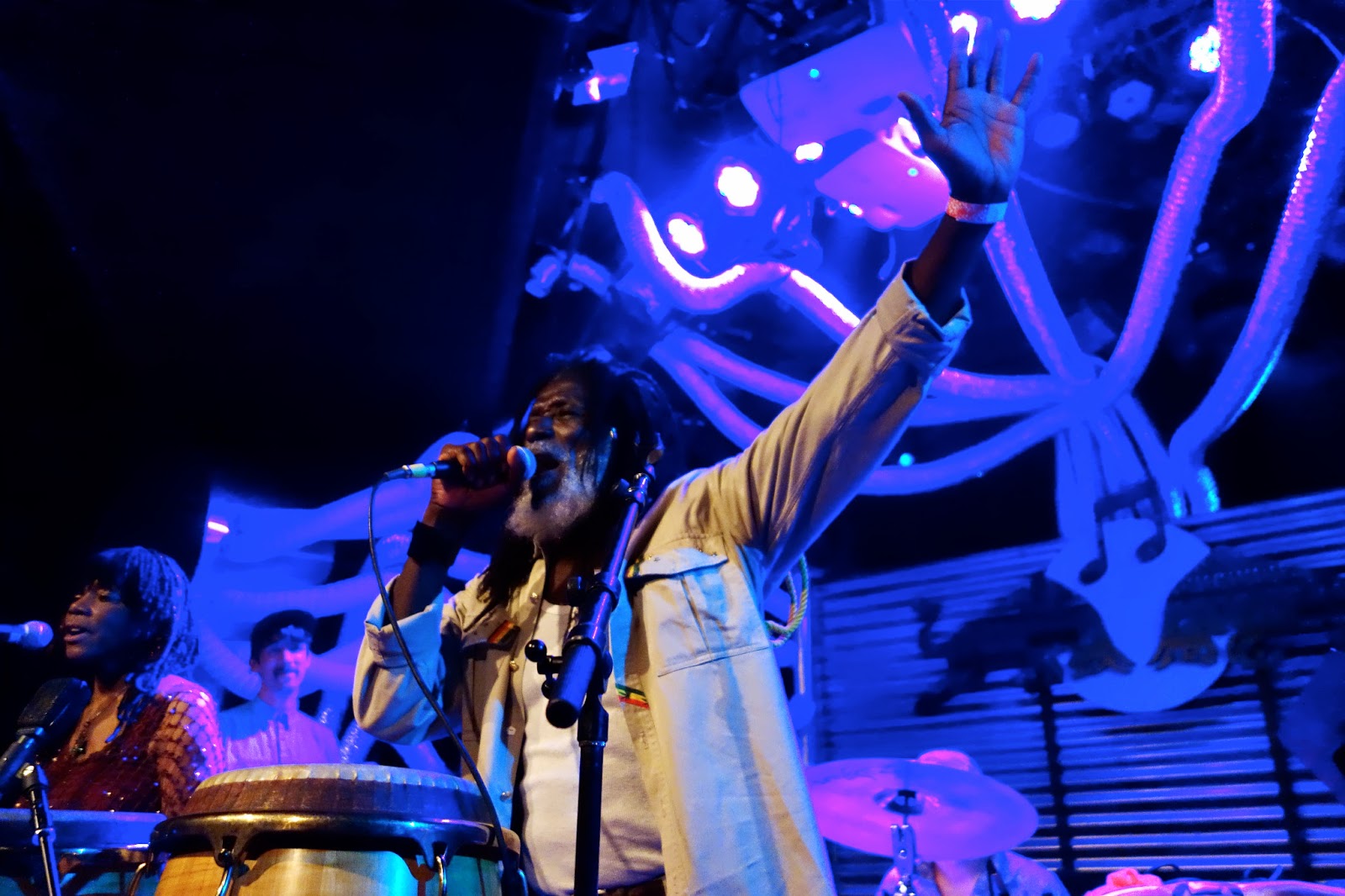 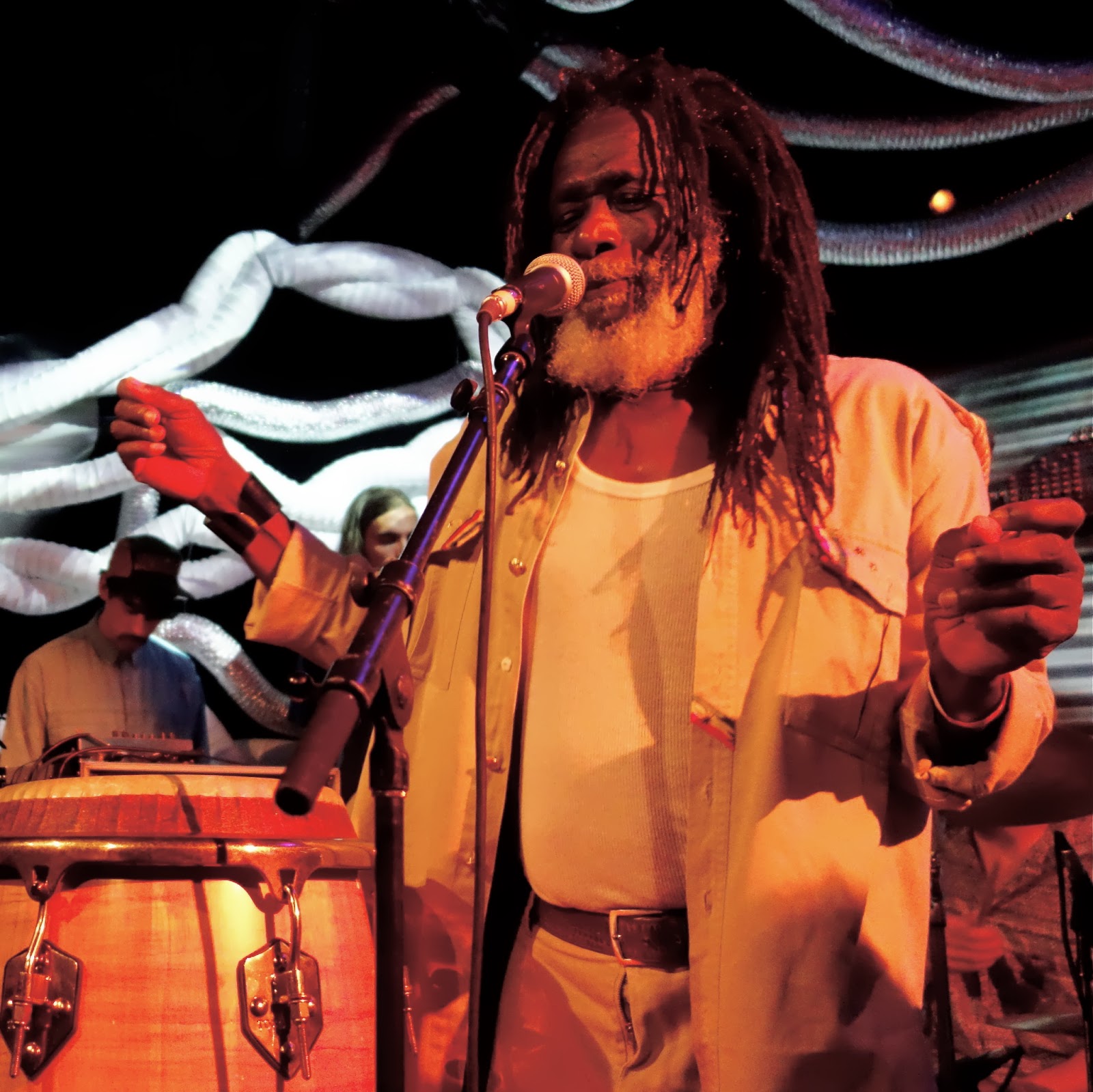 Watching Congo Ashanti Roy beam from ear to ear as he played his drums and sang his heart out was truly a treat.  His deep appreciation of the crowd was obvious and repaid with frequent screams of "love you" from the crowd.  On the other end of the stage, Watty Burnett danced like a much younger man, consistently cutting a rug with limber moves and joy filled bouncing.  Their set was full of heavy hitters from Heart of The Congos, their roots reggae masterpiece produced by Lee "Scratch" Perry at his Black Ark studio in 1977.  Songs like Fisherman, La La Bam Bam, and Ark of the Covenant sounded just as crucial as they did back in the day, a testament to their timeless genius.  Often they'd start a song and let you feel the power of the music, only to stop the band with shouts of "stop track".  The teasing was a brilliantly designed performance element that made you long for each song.  The crowd responded with shouts and pleas for the music to continue.  Then Watty would call out "run track" and the band would get it rolling once again.  When they did the place went nuts. 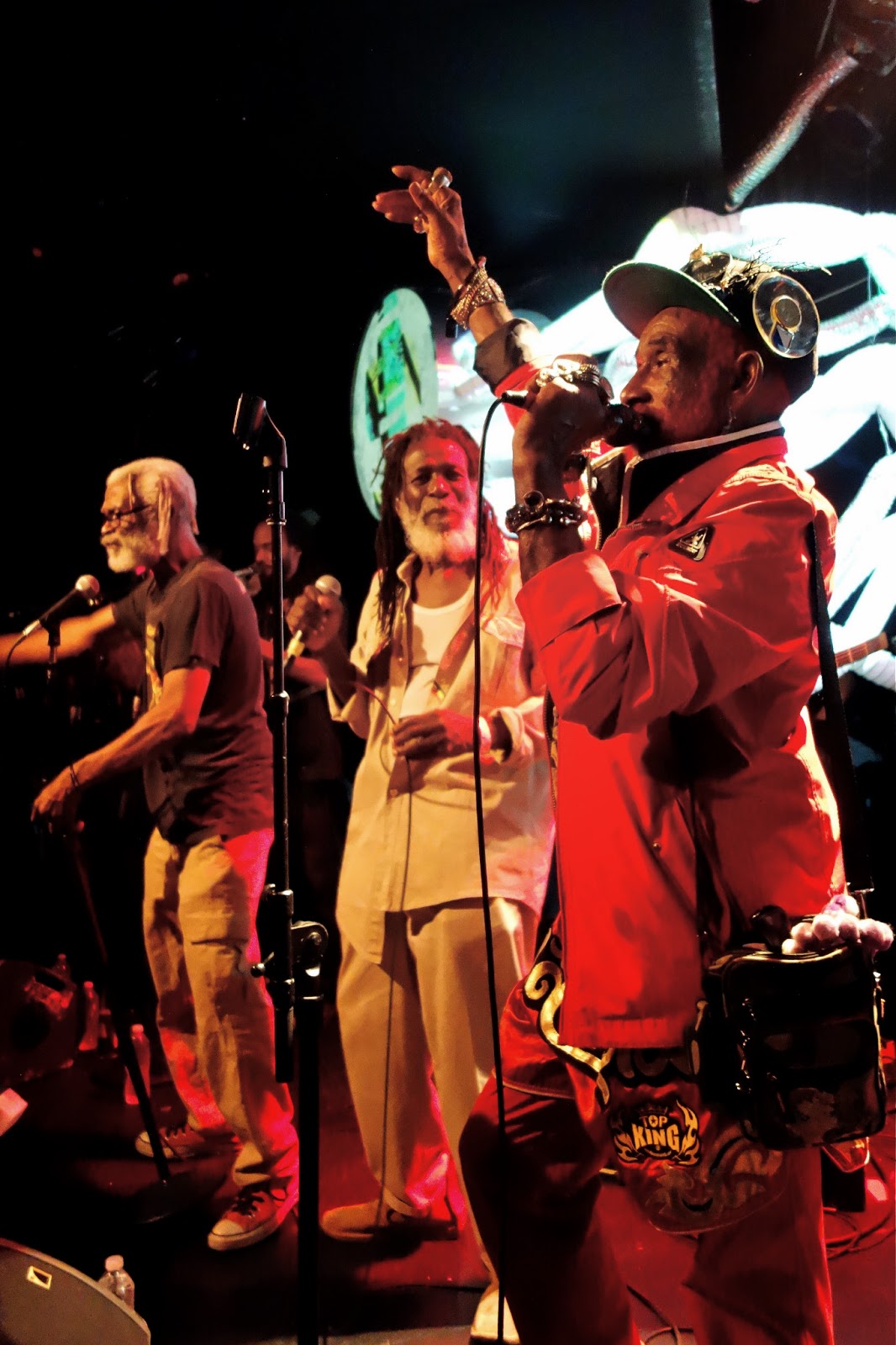 The final performance of the night was The Upsetter, Lee "Scratch" Perry.  Looking like an old man with a love for red hair dye, trinkets, jewelry and mirrors, he took the stage along with The Congos to the deep groove of Zion's Blood.  The giant speaker system provided by the RBMA shook the walls and rattled the light rigging.  Backed by the Subatomic Sound System, Adrian Sherwood, a full horn section, an incredible congo player, and special guest Addis Pablo (son of Augustus Pablo) on melodica, he put on one hell of a thumping performance.  You can't really appreciate dub music until you hear it live and at full volume.  The bass makes your feet tingle and body move while the drums rattle your chest.  It's like a full body vibrator.  Musically, this show was mind blowing.  However, Lee's stage presence was just bonkers.  After every song he ran the flame of his lighter over his mic to clean it of any bad spirits.  He repeatedly shared the fire with the crowd for audience members to pass their fingers over it. More than a few times he lost beads from his boots and looked around the stage for them, shoving them in his pocket once they were found.  He never really sung, instead playing the role of MC and spiritual rambler.  I don't think I understood more than a handful of words.  In a room that must have been around 90 degrees, he rocked an outfit fit for a ski slope.  Never in all my years of attending shows have I seen a performance even close to this level of absurdity.  But, like everyone there, I went with it and had a great time.  What he lacks as a performer at this point in his life doesn't overshadow the fact he is one of the most important figures in the history of modern music.  Those of us who saw him on Thursday were there to pay him the respect he's earned. 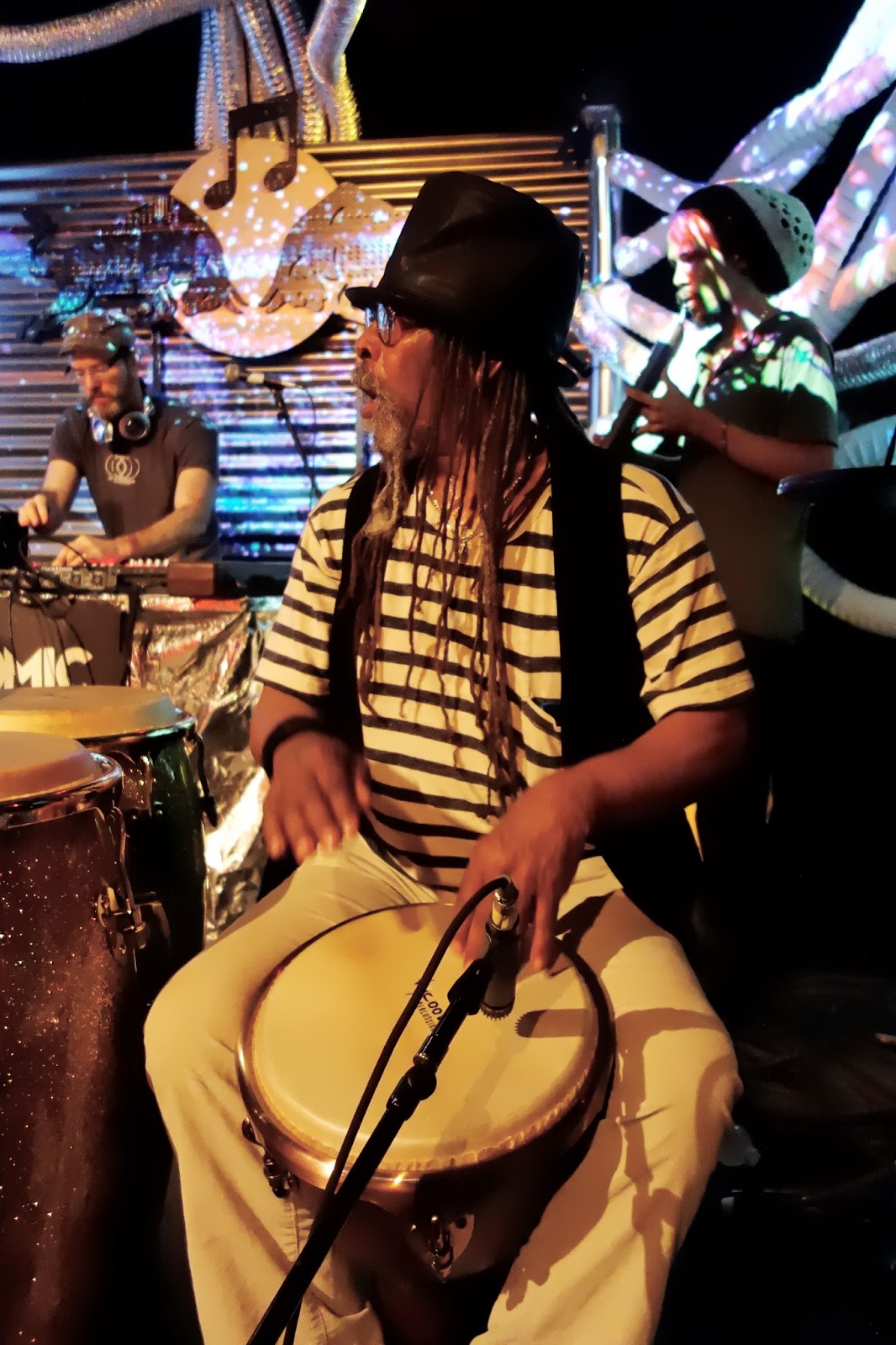 It's often said that there's a thin line between genius and madness.  Lee "Scratch" Perry, after 77 years of living, proves a venn diagram is more accurate by being both.  Lee is way out there.  Just Google him and read some interviews.  But under the outer insanity is a truly brilliant mind.  This is the man who helped invent and popularize reggae music, blending elements of rock steady with the spiritual music he heard in church.  This is the man who took a young Bob Marley under his wing, writing and producing for him, shaping him into an icon.  This is the guy who invented dub music using innovative recording techniques and turning the producer into the star, creating a new world of possibilities that lead to the rise of electronic music.  Lee was the first to believe that drum and bass could work on their own, especially if you filtered them in interesting ways.  His dub remixes of previous cuts virtually invented the remix.  Lee Perry also pioneered sampling by being one of the first to incorporate them and feature them prominently.  He invented new sounds by doing things like burying a mic under a coconut tree and then sampling the sound of striking it.  Toasting over beats, which grew into hip hop once it arrived in the Bronx, started in Jamaica.  Whose music was popular for toasting over in Kingston in the early 70s?  Lee "Scratch" Perry.  It goes on and on and on and on.  The musical landscape we live in today would be radically different had the world not been blessed with Lee "Scratch" Perry.  He has earned the right to be as out there as he wants.  Shaking his hand, running my fingers through the flame of his lighter, and sharing a smile with him is something I'll never forget. 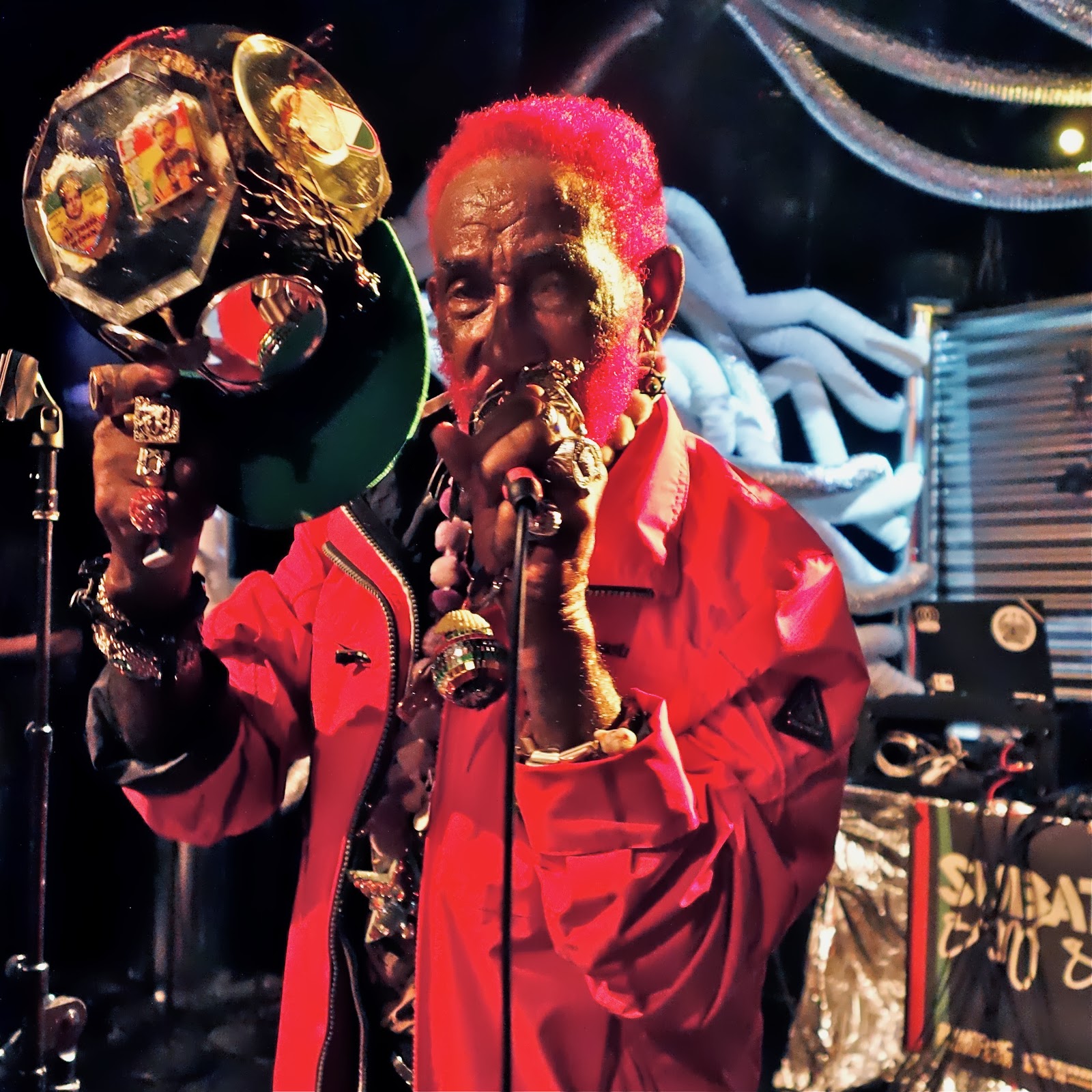